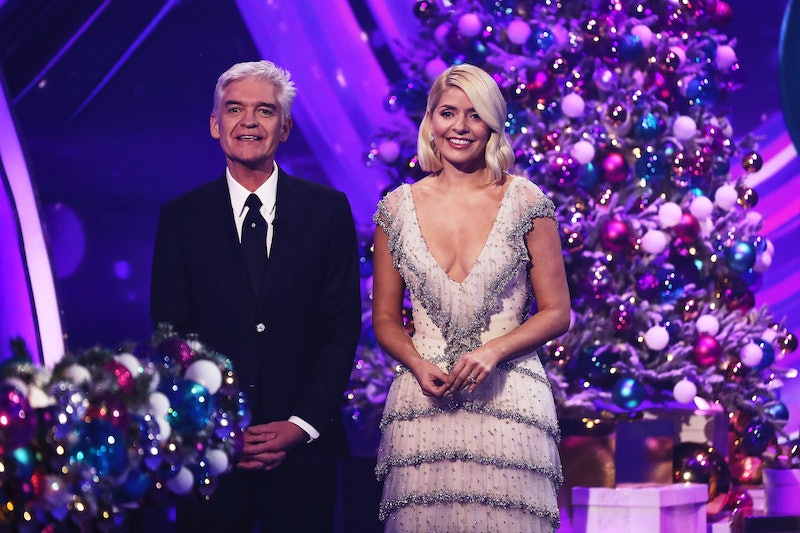 Although Dancing on Ice isn't due to return until early next year, everyones favourite ice skating competition-show is gliding onto our screens for a Christmas special. Fronted by veteran hosts Phillip Schofield and Holly Willoughby, the festive spectacular will welcome back a string of contestants from years gone by, and introduce audiences to the official 2020 lineup of celebs. But when is Dancing on Ice at Christmas on ITV?

Well, the two-hour Yuletide special will air on Sunday, December 22, at 7 p.m. on ITV1, and as usual, the show will be available to watch on the ITV Hub shortly afterwards. Throughout the episode, next year's confirmed lineup of Dancing on Ice skaters will take to the ice for the very first time, and in addition to some show-stopping routines, viewers will also discover which professional skater each of the competing celebrities have been partnered up with. However, the celebs won't be alone on the famous rink, as ice-skating legends Jayne Torvill and Christopher Dean are set to perform a very special routine.

As mentioned previously, a lineup of past Dancing on Ice contestants will also pop up throughout the festive spectacular, and as The Sun reports, audiences can expect to welcome back The X Factor's Ray Quinn, who won the series back in 2009, I'm a Celebrity runner-up Jake Quickenden, and, of course, reality TV legend Gemma Collins, who made quite the impression during her 2019 stint on the ITV competition series.

However, all eyes will surely be on the newest batch of famous skaters, which as iNews reports, includes ITV news anchor Lucrezia Molinari, talk show host Trisha Goddard, Diversity's Perri Kiely, Coronation Street's Lisa George, Paralympian Libby Clegg, Love Island's Maura Higgins, and more — but unfortunately, TV presenter Michael Barrymore will no longer be part of the series, and was forced to withdraw from the competition after suffering an injury during training. Thankfully, former-Blue Peter Radzi Chinyanganya quickly stepped in to take his place, and you can catch Dancing on Ice at Christmas on Sunday, December 22, at 7 p.m. on ITV1.