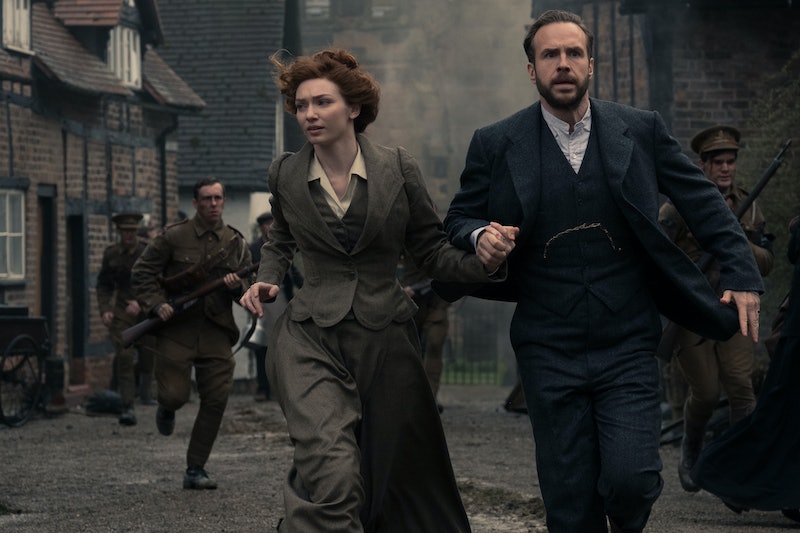 The War Of The Worlds / BBC

The BBC adaptation of the HG Wells science fiction classic War Of The Worlds is set to arrive on our TV screens very soon. The show will arrive eighty years after an infamous radio broadcast of the original novel, which saw widespread panic as listeners believed that the world was actually coming to an end. The new three-part television version was penned by Doctor Who’s Peter Harness. But when is War Of The Worlds on?

According to the Radio Times, no official start date of War Of The Worlds has yet been confirmed by the BBC, however, I've reached out for comment and will update with any information once it arrives. The show was announced back in the spring of 2017, and production began in April 2018, with some of the filming taking place in Liverpool. The series will star Poldark's Eleanor Tomlinson and Jurassic World's Rafe Spall as the characters of George and Amy — a couple who defy social prejudices to start a life together, despite an ongoing alien invasion.

Other members of the cast include Rupert Graves as George’s brother Frederick, and Robert Carlyle as an astronomer known as Ogilvy. When discussing the show's cast, Tommy Bulfin, the BBC commissioning editor said "It’s fantastic to have Rafe and Eleanor leading such a brilliant cast of British acting talent in the BBC’s faithful adaptation of H.G. Wells’ legendary story."

The story begins when a strange object crashes into the heart of England, and then begins to hatch. Shortly afterwards, the entire world finds itself under attack from an aggressive army of aliens. As reported by the Radio Times, the original novel was released back in 1897 by the English author HG Wells, who is also known for The Time Machine and is often referred to as the "father of science fiction."

According to the show's director Craig Viveiros, the BBC adaptation will stay true to the original book. He said "HG Wells' seminal novel has been adapted for the screen many times, but it's always had a contemporary (and American) setting. This is the first version to be set in London and during the Edwardian period." Show writer, Peter Harness, then added "The version of The War of the Worlds that I wanted to make is one that’s faithful to the tone and the spirit of the book, but which also feels contemporary, surprising and full of shocks: a collision of sci-fi, period drama and horror."

Sharing the enthusiasm of the team behind the camera are some of the show's on-screen stars, and actress Eleanor Tomlinson told the BBC, "I’m delighted to be taking on the Martians with Rafe Spall in Mammoth Screen's adaptation of The War Of The Worlds. I’ve been a fan of Craig Viveiros' work for a while, so creating this world with him at the helm is very exciting."

War Of The Worlds is expected to air sometime in 2019, and it sounds like it's going to be out of this world. Bring on the new year.