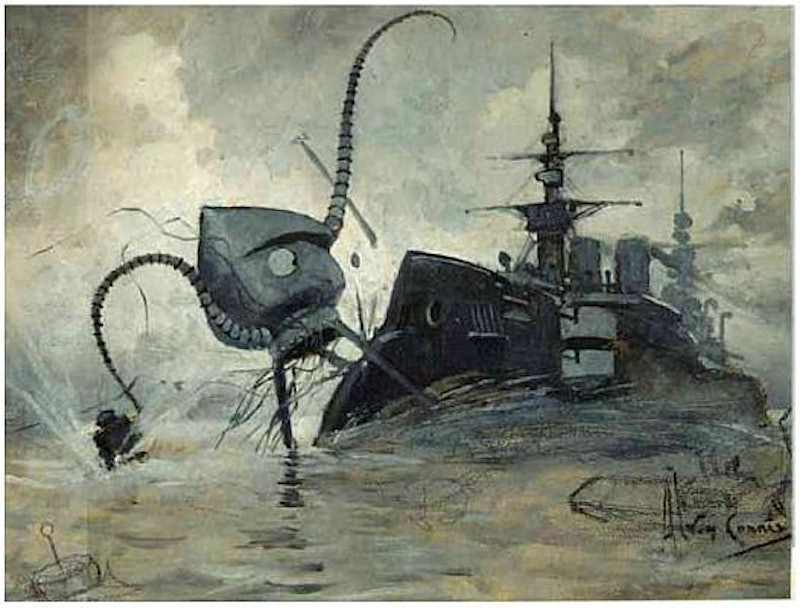 In 1938, four decades after H.G. Wells' novel was published, Orson Welles' War of the Worlds broadcast adaptation became enshrined in U.S. history as one that incited mass hysteria. My dad told me the story, embellishing it with suicides, lootings, and murders he was sure had happened. This Friday is the 77th anniversary of that epic broadcast, and it's perfectly timed for you to celebrate Halloween by listening and scaring the bejeezus out of yourself.

The radio drama employed multiple actors to perform a simulated newscast. That's right: Howard E. Koch wrote Welles' version of The War of the Worlds to sound like an actual account of contemporary events, and that aliens were actually invading Earth right this second. Only Dan Seymour's announcements at the beginning and midpoint of the hour-long broadcast give it away as fiction.

The reality of reactions was much less eventful than my father's stories, however, skewed by print journalism's place at the epicenter of news media at the time. Panicked folks phoned their local newspapers to find out what the hell was going on in New Jersey. Confirmation calls made across the country gave reporters the impression that hysteria was overtaking the U.S. The next morning, the story of Welles' play-induced panic had bumped updates on Hitler below the fold. That's the power of a well-told story, everyone.

In an interesting twist, the newspaper coverage of the hysteria created a new kind of panic. Listeners who knew the broadcast was part of Welles' The Mercury Theater on the Air wrote to both the dramatist and the FCC to proclaim that those who had been fooled posed a threat to democracy. One man called for them to be sterilized and stripped of their voting rights. According to Vanity Fair, The War of the Worlds ultimately "inflamed fears that democracy could not survive in the age of propaganda, prompting an outpouring of anger and fear over the power of the media in American society."

Even if it didn't throw the country into a state of hysteria, those who mistook it for actual field reporting could be forgiven the mistake.

So if you've got an hour to kill, listen to The War of the Worlds broadcast above. Sure, it's 77 years old at this point, but Welles' line, "I'm obsessed by the thought that I may be the last living man on Earth," will still give you chills. And just in time for Halloween, too.

More like this
Prince Harry Incorrectly Recites Christina Aguilera’s “Genie In A Bottle” Lyrics
By Jake Viswanath
I Read Prince Harry's 'Spare' So You Don’t Have To: 11 Highlights To Know
By Marina Watts
'Mayfair Witches' Already Changed 2 Major Characters From The Books
By Grace Wehniainen
Owen Thiele Asked Sundance Attendees About Films That Don’t Exist
By Grace Wehniainen
Get Even More From Bustle — Sign Up For The Newsletter
From hair trends to relationship advice, our daily newsletter has everything you need to sound like a person who’s on TikTok, even if you aren’t.