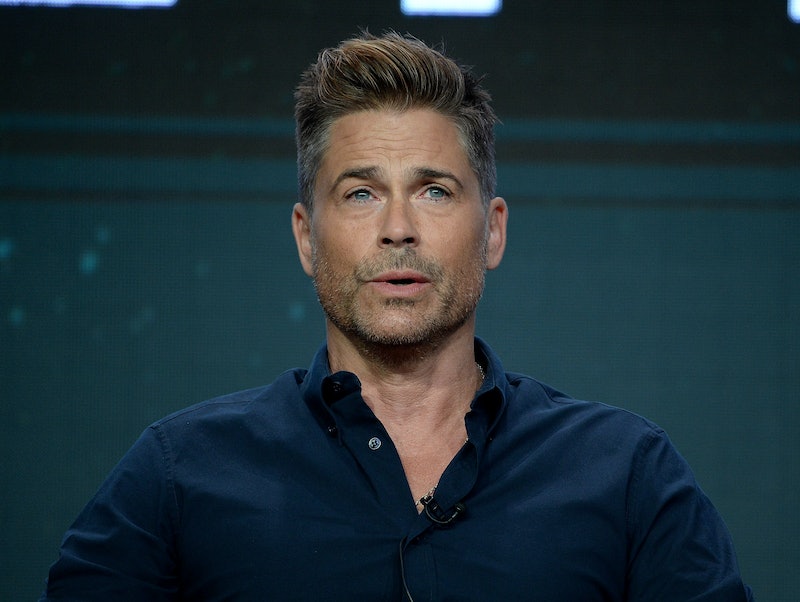 If it feels like you haven't seen Rob Lowe in a while, and you've really been missing that handsome face of his, then here's some very good news for you. The Parks & Rec actor's has once again found himself a firm place on our TV screens, as he plays the starring role in a new, and much anticipated, ITV police drama:Wild Bill. Lowe will be playing a U.S. policeman who's forced to join the Lincolnshire East Constabulary in Boston, England. It's sure to be a wild ride, but when is Wild Bill on? Well, here's the Lowe-down on everything I know so far. (Sorry.)

ITV delivered a first look at the show when they uploaded a trailer for Wild Bill onto YouTube on Mon, May 20. And while there's quite a lot to unpack from it — including a scene in which Lowe is depicted throwing cabbages and screaming — the date at the end is what I'm most interested in right now. "Coming June" is what the trailer states, although a more specific date has yet to be released.

Bustle have reached out to ITV to see if any specific dates have been confirmed. I will let you know if I hear anything.

You can expect Wild Bill to be similar to action-packed shows such as Fargo and Better Call Saul, as Lowe told Deadline at the beginning of 2019:

"I love these shows where there’s a titular hero in the middle of it, but surrounded in a world in that is very odd, very different and really authentically intense and violent, and then really, really sweet and emotional and then really, really funny, all at once. And it’s hard to do and our writers pulled a rabbit out of a hat.”

ITV commissioned Wild Bill on Oct. 12, 2018, and announced that the show would be made in collaboration with 42 (the studio that brought you the likes of Traitors, Ironbark, Watership Down) and Anonymous Content, who have put out such heavyweights as 13 Reasons Why, Maniac, and Mr. Robot. So, as well as a touch of the lighter stuff, you can certainly expect some hard-hitting drama in Wild Bill, too.

It's also set to cover some topical issues, as the show's set in post-Brexit Britain, and takes place more specifically in the little-known location of Boston, Lincolnshire. Apparently, Lowe had no idea that there was a Boston in England, as he revealed to Variety in an interview from Feb. 20.

Nevertheless, the actor reckons that Wild Bill could put Boston, UK, on the map, as he told the site that the show could have the potential to follow in the footsteps of Britain's most beloved crime shows. He even went so far as to compare Wild Bill to Luther. “This could be that next show,” he said. “This could be a good successor to those shows.” The next Luther, eh? I'm going to be hovering around ITV all throughout June in anticipation of Wild Bill, just to see whether Lowe lives up to his promise.

More like this
Hannah Khalique-Brown Has Her Sights Set On 'Strictly'
By Frances Stewart
You'll Never Guess Which Hollywood A-Lister Big Mo Is Related To IRL
By Sam Ramsden
Michelle Keegan Is About To Have Her Very Own 'Bridgerton' Moment
By El Hunt
Where Is Oscar Torres In 'Only Murders In The Building' Season 2?
By El Hunt
Get The Very Best Of Bustle/UK