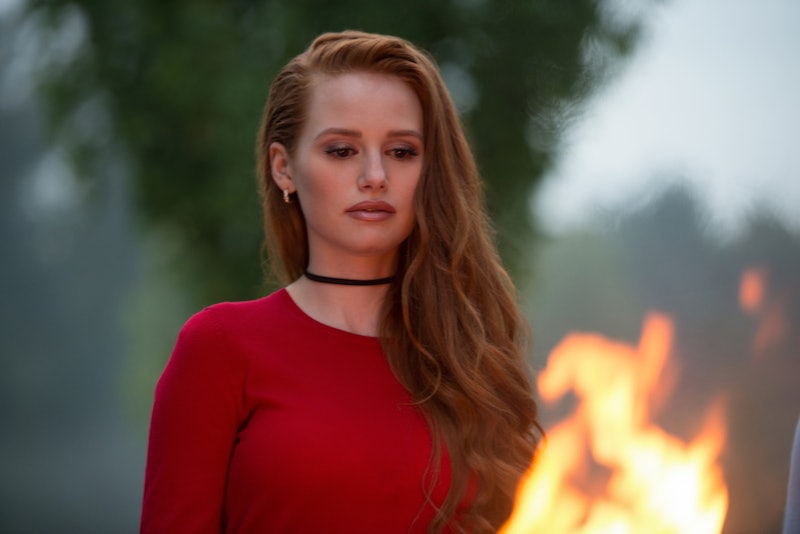 Everyone watching Riverdale, the CW's postmodern noir-ish interpretation of the Archie Comics canon has a theory about the show's central mystery: who killed Riverdale High student Jason Blossom? Even the actors made their guesses, though at least one was way off. "I was so beyond wrong," Madelaine Petsch tells Bustle. On Riverdale, Petsch plays Cheryl Blossom, the twin deceased golden boy Jason left behind. And if you think his death is hitting Cheryl hard already, just wait until Riverdale reveals the individual responsible. "I kind of had a weird inclination that it was the person that it is, but I didn’t want to believe it," Petsch says. "Because if it was, it would literally ruin Cheryl’s life. More than it already is ruined."

But while her character is living her worst nightmare, the actor is having the time of her life. "I do tend to lean towards enjoying the villain a little bit more," Petsch explains. (Her favorites are Blair Waldorf and of course, Regina George.) And she's relishing playing Riverdale High's imperious queen bee. " I genuinely think I’ve got the funnest character in all of television," she declares. And just like Riverdale fans, she also looks forward to Cheryl's weekly, brutally articulate take-downs. You can practically picture Petsch flipping excitedly through her script as she says, "Every single episode, I’m like, 'Where is the speech at? What’s going on? When is she interrupting lunch? Where is she popping up out of nowhere?'"

But what sets Riverdale apart from other Archie properties and Cheryl apart from other mean girl characters is that deep inner darkness and hurt. Though turning an all-American comic book about a guy being torn between a blonde and a brunette into a small-town murder mystery may have seemed at one point like a strange choice, Petsch thinks it's the shadowy aspect of Riverdale that's pulling in viewers, especially those in its young adult target audience. "I think teens like the darkness because there’s something dark within everybody, and maybe it helps them justify that," the actor says. "So many people have gone through sexual abuse or slut-shaming or what have you, and to be able to bring that to light on a television show, I think people can relate."

Petsch says she's received "an overwhelming response" from many young female fans specifically about "Chapter Three: Body Double," the episode where the young women of Riverdale High stand up together against slut-shaming. She also hopes that her character will enable the fans who tell her they're experiencing bullying to realize that "it has nothing to do with them." Cheryl lashes out at her peers to hold onto some semblance of control, but the show's attention to her inner life proves that she's primarily motivated by her own demons. "Cheryl’s not mean because she hates the people around her," is how Petsch puts it. "She’s mean because she hates herself."

But Petsch points out the Feb. 23 episode — the one with Jason's memorial service — as an instance where Cheryl let her guard down to a sympathetic response, particularly from confused sleepover guest Veronica. Riverdale has already subverted historic rivalry between Betty and Veronica by making the two girls fast friends; though Cheryl isn't going to thaw completely, her solo time with Veronica will have an lasting impact. "And even though her and [Veronica] don’t remain super close for the whole season, you see [Veronica] constantly coming back to Cheryl," Petsch says. "I think [her classmates] see a lot more of her and they start to pity her."

The actor has been on this journey with Cheryl, since Petsch says that Riverdale creator and head writer Roberto Aguirre-Sacasa has been "so good about only giving us the information our characters would have." It wasn't until she actually read the script for the penultimate episode of the season — when the killer is exposed — that Petsch knew the truth of Jason's end. And the next episode? Well, the actor promises that the truth will send Cheryl into a complete tailspin. "In [Episode 13], Cheryl just goes literally insane," she says. "It was so much fun. I did more things in that episode than I’ve ever done before than in the whole series."

Petsch says that the note that the season actually ends on was so top-secret that the pages weren't even included in the initial finale script. The pages were distributed to only the actors who needed them on the actual day that they filmed. But Petsch confesses that she sneaked a peek: "Because I had to know!" And though the CW has not yet officially renewed Riverdale for a new season, things aren't looking good for Ms. Blossom in those hypothetical future episodes.