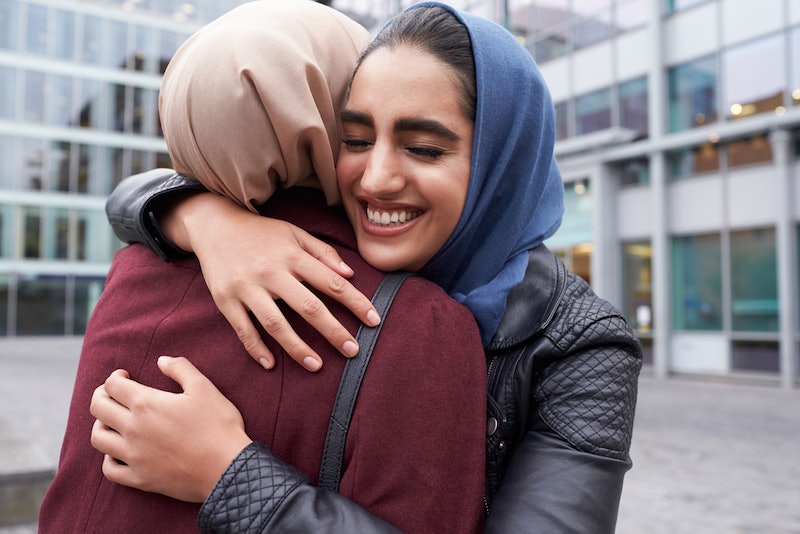 A few years ago, I went into my local coffee shop during the month of Ramadan. I wasn’t fasting because I was on my period, a reprieve granted to women in my faith. But when I ordered my iced coffee, I was met with the disapproving glare of the male, Muslim cashier. It was a brief encounter, but the memory stayed with me, as did the stinging feeling of being judged.

During Ramadan, which began on May 5 this year, Muslims abstain from food and drink, including water, from sunrise to sunset for 30 days to grow closer to God. It’s a time for community, family, and introspection. But for those who can’t participate due to health or medical reasons — like pregnancy, menstruation, or diabetes, which are all acknowledged in Islam as valid reasons not to fast — the month can cause feelings of isolation and shame.

Myriam Fizazi-Hawkins, 48, tells Bustle that she used to fast, but stopped after being diagnosed with Irritable Bowel Syndrome (IBS) and depression. Her doctors told her fasting was detrimental to her health, but that didn’t stop people from judging her. “I’ve had to explain to near strangers that I have IBS and chronic depression,” says Fizazi-Hawkins. “It feels like an invasion of privacy.”

She says that Muslim friends and acquaintances have told her to keep trying to fast despite her illnesses, but she realized risking her health wasn’t worth it. “God knows my heart and he doesn't need me to [fast] to prove to him that I am a good person,” she says. “Inside, I feel Muslim, and yet I feel most distant from it during Ramadan.”

Some observers say that even if they’re sick, not fasting at all isn’t an option, and will fast in ways that work for them. They might drink water throughout the day to avoid fainting while still abstaining from food, or fasting a few days at a time if their condition allows it.

“If it harms you, then you’re absolutely allowed to not fast,” Nazima Qureshi, a Toronto-based Registered Dietician/Nutritionist, tells Bustle. Clients come to Qureshi with this very problem. She says that plans to make fasting a possibility can be put into place depending on the person’s health. For example, some people can fast every other day, but one should always talk to their doctor first before making a decision.

For those who don’t or can’t fast, though, feeling left out during this time of the year is understandable. Muslims gather collectively at mosques and in their homes for Iftar, or the meal of the day, to experience the sweet relief of sipping that first glass of water after hours without it. There is a sense of togetherness in the hunger, and the feeling of satiating it.

Both my dad and brother have diabetes, and they’ve wrestled with not being able to fast for years. “During my teen years I did feel very much excluded,” my brother Asif, 29, says. “It was only until my adult years when I came to discover that God allows a [sick or elderly] individual to make up his or her missed fasts by feeding a needy person during Ramadan. Inshallah, God accepts mine.” For him, it’s gratitude and remembrance of God that helps him get into the Ramadan spirit.

Hena Ansari Jaffri, 46, has also struggled with reconciling her health and faith. After being diagnosed with Type 2 diabetes, she continued to fast until it took a real physical toll on her. She would feel shaky, exhausted, and “out of it.”

“[Fasting during Ramadan] was part of my identity,” says Jaffri. “The guilt was there because you really want to have this connection to Ramadan as a family. It was hard because I had teenagers in the house, and everyone was fasting. I just felt like I wasn’t really a part of it, and felt very disconnected.”

Jaffri says she would receive all kinds of alienating comments. People told her she used her disease as an “excuse” to not fast, and that she could power through it, which obviously wasn’t the case.

“I used to take it very personally when somebody would say something and then I would doubt myself. These words were hurtful, ignorant, and judgmental.” Now, Jaffri just shrugs it off. “Before I used to be hurt by it. But now it doesn’t affect me. It’s between me and my Maker.”

Once Jaffri allowed herself to put her health first, she felt relieved. She observes Ramadan by focusing on self-improvement, increasing her prayer, and making sure the home is festive for her three children. “Ramadan is a very personal thing, Jaffri says. “It’s a connection between you and God and who you are. We shouldn’t be judging and we shouldn’t be that hard on ourselves.”

“There’s more to Ramadan than just fasting,” says Qureshi, the nutritionist. “There are community initiatives, charity, spending time with family, and increasing your worship. If you’re not able to fast, focusing on those other aspects or Ramadan will make you feel like you’re still part of the whole experience.”

With roughly 1.8 billion Muslims in the world, people’s relationship with fasting varies, and getting into the Ramadan spirit manifests in different ways. Fizazi-Hawkins tries to make the most out of the month by donating to food banks and hosting Iftar dinners for non-Muslims to explain what Ramadan is all about. And while she’s made peace with her health conditions, she misses the feeling of family during Ramadan, like the giant gatherings in her childhood home in Casablanca, where she prepared traditional Moroccan dishes with her cousins and aunts. Still, when Ramadan is over, and the holiday of Eid al-Fitr commences, she makes sure to spend it with her husband and children.

I’d often get lonely being the only person in my household to fast during Ramadan while my dad and brother abstained because of their health. What I didn’t realize was how much harder it was for them, being left out in a deeply communal experience that Muslims share once a year, and having to find ways to make the month special for them. When I look back on my own experience of being shamed for not fasting, I realize that in an attempt to fulfill religious duties and grow closer to God, people forget simple things, like being considerate and understanding of others. In a time when Muslims are supposed to be their best selves, a little bit of empathy goes a long way.