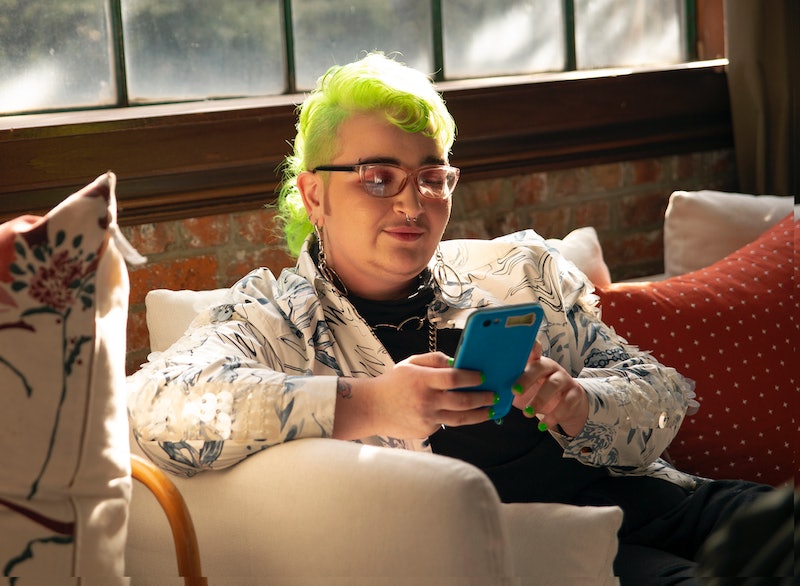 So you've crafted a meticulous masterpiece of a text. Maybe you even had one of your friends proofread it for content and proper emoji usage. It's all ready to go: Your love confession, your invite to a party Saturday night, your simple response to the most benign message ever. But you can't hit send. You're not alone in your texting anxiety, and science says there are perfectly brain chemistry-related reasons you're procrastinating with that text.

"A few things come to mind when I think about unread texts or emails: fear of rejection, abandonment, and judgement," psychotherapist Lillyana Morales tells Bustle. "Humans are naturally social animals, but when anxiety creeps in and pushes a person into fight or flight mode then suddenly something as simple as a text message can be considered a threat."

And because you want to avoid a perceived threat, you often want to avoid your unread messages, Diana Anzaldua, LMSW, tells Bustle. "This avoidant behavior is a form of moving away from reality and feelings of panic by ignoring the messages," she says. These feelings only build as the number of unread messages due, increasing you "social anxiety and social rejection due to having to wait for a response."

That potential for rejection can seem huge when your texting anxiety starts to spiral, Anzaldua says. "Waiting for a text or email response might cause someone to jump to conclusions of 'How did my message come across, did I hit send, was I rude, did I send that to the right person, did my message make sense? Oh my gosh, why did I send that?'" If your response is to panic while waiting by your phone, you're not alone.

Yet waiting by your phone is something that makes the device both your best friend and your worst enemy, according to a 2016 study published in the journal Computers in Human Behavior. The study concluded that even and perhaps especially when being attached to your phone feels like a burden, the psychological validation from incoming texts is something lots of people come to rely on.

Perhaps ironically, that precise sense of validation may be behind your hesitation to send a text in the first place: what if the person doesn't respond quickly? What if they don't respond at all? Or what if, worst of all, you can see the notification that they read the text but still haven't responded?

Morales tells Bustle that when you start considering these possibilities, it might help to get to the root of the spiral. "Ask yourself questions like, 'Why am I feeling anxious about reading or sending a text to this person?' and 'What are the best, worst, and most plausible scenarios of opening or sending this message?'" If you don't get the responses you're wanting when you do the dreaded act of pressing send, you might still think, you'll miss out on that crucial desire for validation. But even if that happens, Morales says, "It's important to allow yourself to experience the full spectrum of emotions, which can include happiness, anger, sadness, fear, and excitement" without shaming yourself for feeling those things.

According to a 2010 study published in the journal Frontiers in Behavioral Neuroscience, you get a dopamine boost from positive social reinforcement, including from receiving text messages. So even if you don't respond to a text, your body wants to get more of them. But here's the catch: dopamine is a neurotransmitter that gets released when you feel good, and it makes you want to repeat the behavior that felt good over and over again. And dopamine boosts are highest when the reward is unpredictable and uncertain, according to a 2013 study published in the journal Behavioural Brain Research. So when you're procrastinating about sending that response, your procrastination may well be less about actually sending it, and more about fear of the response (or lack thereof). That unpredictability is something your body is well-suited for: the greater the perceived risk, your dopamine levels say, the greater the reward. And the greater the likelihood that you're going to procrastinate before sending or evening opening texts.

It's not all texting doom and gloom, though. A 2018 study published in the journal Computers in Human Behavior found that romantic partnerships and friendships can flourish significantly when you and your person have a similar texting style. If all parties involved like quick responses, the study concluded, the relationship is less likely to be flooded with anxiety. Similarly, if all parties involved prefer to not text as much, or don't mind longer gaps in responses, everyone is happier.

When texting styles don't match up, though, anxiety can hit its peak. And that's when you can strategize to reduce your anxiety and form an action plan. "Spend a few minutes each day responding to emails and texts," Anzaldua tells Bustle. "Choose a half hour time slot in their day to respond to emails and texts. This way if you obsess about it in that moment, you will reduce the anxiety to respond immediately and defer to your designated time to reply/read the messages."

So it seems that the pressure to send a text might actually be rooted in your body's potential reaction to getting a response, or lack of response. Perhaps that's why people seem to take so well to text-based mental health interventions: the guaranteed and quick response from web-based apps, hotlines, and doctors seeking to give people a mental health outlet makes these services both popular and effective, according to a 2016 study published in the journal Psychiatry Research.

If you're procrastinating about sending a text, then, it might be good to check in with your person or your friends about what their texting style is. "If you're comfortable enough with your loved ones, it may be worth expressing that you're having a difficult time with messaging right now and there may be delays in your communication with them," Morales tells Bustle. It might help you in the future, reducing the guess work and allowing you to get your texting dopamine without quite as much anxiety. Texting is hard because communication is hard, but you've got this. [Insert supportive emoji here.] You really do. And wherever you are in your texting journey, Morales reminds you to do one crucial thing: "Be kind to yourself."

More like this
How Ovulation Affects Your Sense Of Smell, Libido, & More
By JR Thorpe and Lexi Inks
Ashamed Of Your Screen Time Stats? Here's How To Change That
By Alexis Morillo
How To Turn Off TikTok Profile Views So You Can Stalk Other Accounts In Secret
By Alexis Morillo
Wait, Does Liking Someone's IG Story = Shooting Your Shot?
By Alexis Morillo
Get Even More From Bustle — Sign Up For The Newsletter
From hair trends to relationship advice, our daily newsletter has everything you need to sound like a person who’s on TikTok, even if you aren’t.