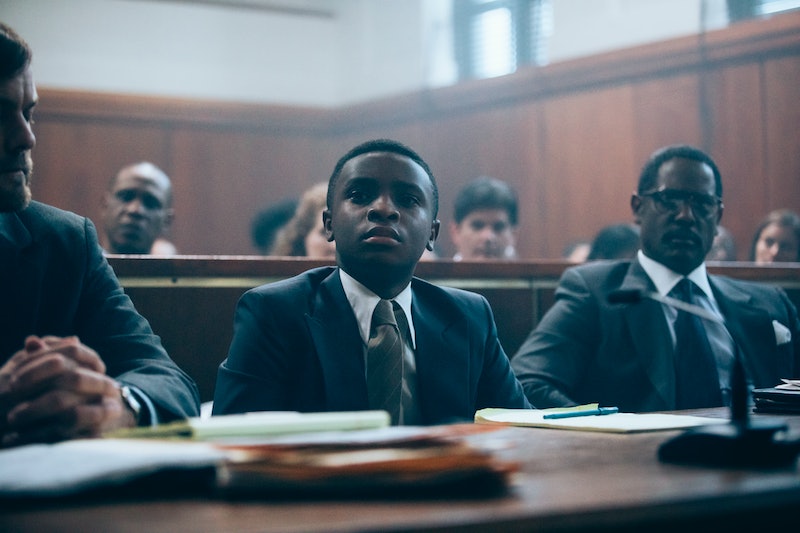 Ava DuVernay’s new Netflix docuseries When They See Us depicts the heartbreaking story of the 1990 Central Park Five case in which a group of young Black and Latinx boys were convicted of a crime that they did not commit. Antron McCray, Kevin Richardson, Yusef Salaam, Raymond Santana, and Korey Wise, falsely confessed to the rape of a female jogger, which led to them being imprisoned for six to 13 years. The series explores the ways the Central Park Five were villainized in the media and in public opinion — and particularly for their use of African American English (AAVE) and Black slang.

In an interview with The Hollywood Reporter, DuVernay said that when the case was first publicized, she was shocked at how the media’s misinterpretation of slang in the Central Park Five case led to the further dehumanization of the boys. One scene in Episode Two shows how, after some of the boys told detectives that they were “wilin’ out” in Central Park on the same night the rape occurred, the media interpreted the phrase to mean “wilding,” when it just means having fun or hanging out. The screen cuts to tabloids and newspapers with the words “WILDING” splashed across them as an indictment. Audio clips play newscasters interpreting "wilin' out" as a description of violent acts committed by “wolf packs” of young people. To translate "wilin' out" as "wilding" cements a vision of these innocent boys as "wild," as savage, as animal, as other, a vision that's rooted in the institutional dehumanization of Black people.

“The fact that wilin' became wilding, became wolf pack, became these boys are animals... I remember for the first time realizing that the news might not be true, that the news is something that you have to really think about and question,” DuVernay told The Hollywood Reporter. Unfortunately, even though the Central Park Five were convicted in 1990, this is still an issue today. In addition to facing barriers in employment, housing, healthcare, and education, Black people are often punished simply for a way of speaking.

It’s important to stress that not every Black person speaks AAVE and not every speaker of AAVE is Black. Nonetheless, it is a Black dialect with its own unique structure, rules, and syntax — all vital components of every language. Although many linguists now recognize the validity of AAVE, its association with a marginalized racial group can have devastating consequences.

University of Pennsylvania linguist Taylor Jones, along with New York University sociologist Jessica Kalbfeld, Ryan Hancock of Philadelphia Lawyers for Social Equity and Robin Clark, recently authored a study showing that Philadelphia court reporters frequently misinterpret AAVE. Philadelphia court reporters are required to score 95% accuracy when transcribing court proceedings, but none were able to score 95% when tested on AAVE. The study also found that most of the court recorders held negative beliefs about both AAVE and Black people, impacting their ability to correctly interpret what they heard.

Taylor tells Bustle that his team’s research illuminates how “the toxic mix of misunderstanding the language, negative attitudes about the language, negative attitudes about slang, and not understanding facial expressions,” can lead to unfair legal consequences for Black people. Think of what happened when Warren Demesme, then 22, was denied a lawyer because, during an interrogation by New Orleans police, he said, “just give me a lawyer, dawg.” This was misinterpreted to mean that he wanted a canine attorney and his request was denied, in a bewildering misapplication of justice. Anyone familiar with hip-hop slang or pop culture at large would know that “dawg” is shorthand for “dude” or “man.” While this kind of willfully obtuse reading of AAVE ultimately is rare, the more common forms of misinterpretation are more insidious.

That's one reason, of many, that the Central Park Five case is so haunting.

Taylor points out that due to extensive racial segregation in the U.S., many non-Black folks truly don’t understand the most basic expressions of AAVE. He says although their study was intentionally careful about omitting slang terms — which he says are “ever-changing and shifting" — the participants were not able to accurately translate AAVE language structures into standard English. “We assume that we understand way more than we do and we assume that we're communicating more effectively than we are,” Taylor says, meaning that sometimes AAVE speakers also don’t realize that they aren’t being heard.

Many speakers of AAVE — and this includes non-Black people, too — have found that to avoid the the possibility of their dialect being misinterpreted, they must code-switch, or use different tone and diction in different social settings. As a Black woman, I've had to code-switch in all aspects of my life. I even had to code-switch around my own family, as my great-grandmother felt that Black American language and slang was "undignified." However, the ability to code-switch is a kind of privilege of its own, because as Taylor’s study points out, dialect is also correlated with socio-economic status. And while many people are vulnerable to discrimination within the criminal justice system, lower-income people with less education are disproportionately impacted. And in moments of intense emotion — such as an interrogation — anyone’s ability to code-switch can be impacted. This lack of access to code-switching can be devastating.

A 2016 paper by Stanford University researchers John R. Rickford and Sharese King argues that linguistic discrimination led to the acquittal of George Zimmerman, the man who killed 17-year-old Trayvon Martin. Martin’s close friend Rachel Jeantel was the prosecution’s main witness, but because she spoke Carribbean-inflected AAVE, Rickford and King say her “crucial testimony was dismissed as incomprehensible and not credible.” On Megyn Kelly’s show America Live, attorney Jonna Spilbor said that Jeantel, then 19, seemed “brutally ignorant.” On Fox News, Sean Hannity said that she had a “credibility problem.” In their paper, Rickford and King state that “the disregard for her speech in court and the media is familiar to vernacular speakers.”

These cases are infuriating, because they're unfair. It's shocking to think of how many people might be wrongfully punished simply because they use a dialect that's different to what's considered standard. That's one reason, of many, that the Central Park Five case is so haunting; these men spent years in prison because of institutionalized racism around the way they spoke.

Black language is thought to be deviant, something that is undesirable or indicative of unintelligence, criminality, or depravity (until, of course, it's appropriated by non-Black pop stars). When neither court recorders, jurors, lawyers, or judges possess a grasp of this valid form of language, it can lead to injustices that take years to correct — if they ever are meaningfully addressed. The men of the Central Park Five case lost years of their lives because of linguistic discrimination. How many are still suffering?