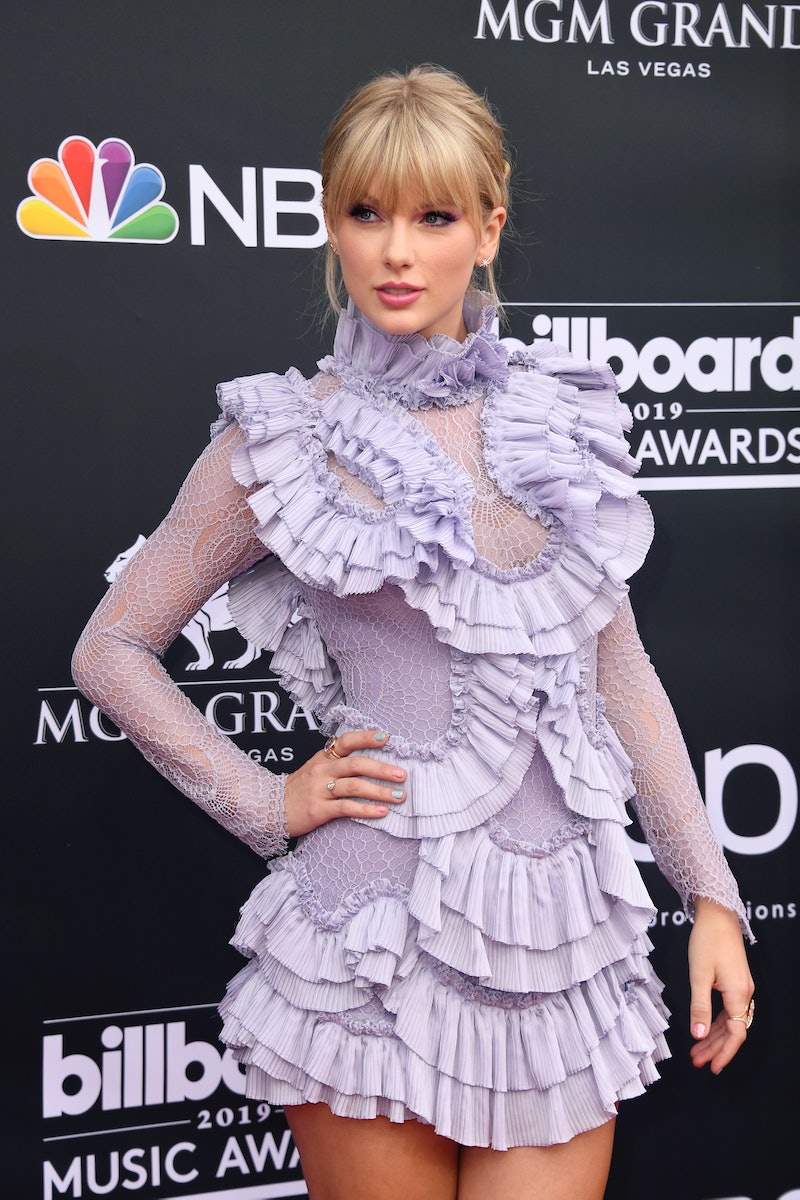 The "TS7" era is officially here. Taylor Swift will release her seventh album Lover on Aug. 23. The singer is also launching an unexpected but totally awesome collaboration that you will so want and need. A Taylor Swift and Stella McCartney fashion collection is happening and it's inspired by Swift's new music. Swift revealed the collab, alongside other important album details, during a 10-minute Instagram live video on June 13.

It makes complete and total sense for Swift and McCartney to enter into a fashion partnership. Swift changes her look and style every time she releases a new album and those reinventions end up defining each era of her career.

"Another thing I wanted to tell you, for the release of the Lover album, there's going to be a collaboration that I've done with Stella McCartney," Swift said during the Instagram video while rocking a crisp white shirt and cropped, light wash jeans. "She's been a friend for a really long time and also just a woman that I respect so much. I respect what she creates, how she creates it. There's so much whimsy and imagination and romance to the clothing that she designs."

Given the fact that much of the imagery surrounding Lover thus far has been brightly colored and the fact that most of Swift's 2019 outfits have been of the airy, pastel variety, fans can expect something similar from the Swift and McCartney collection.

Swift further detailed how the McCartney mashup came to be, saying, "I've worn a lot of her stuff recently, and she's heard the new album, and this new collaboration is inspired by the Lover album... I'm really, really honored that she would want to collaborate in this way." The singer didn't share exactly when the collection will drop, what's in it or if it's a full clothing line, how much it will cost, or where fans can shop it as of press time. She did say that more details would be available closer to the album launch, though. Bustle reached out to Swift's reps for more information.

Fans will remember that Swift wore an ice blue, princess-like tulle dress by McCartney during her low key appearance at the 2019 BAFTA Awards in February. Now that we know the singer and designer are actually working together on a collection, this dress feels like it was a hint hiding in plain sight. And you know how much Swift loves a cleverly veiled hint.

While many of Swift’s pop star peers like Rihanna and Jennifer Lopez have created multiple fashion lines, Swift has been somewhat selective about her sartorial partnerships. She teamed up with Keds to release a limited edition pair of scarlet shoes back in 2012 during the promotional cycle for her Red album. Swift and the sneaker brand expanded their partnership in 2013 to include multiple styles across seasons.

Swift also teamed with Heritage66 in 2016 for a clothing line that was available in China and looked exactly like Swift's outfits from that period. You know, things like high-waisted paints, crop tops, and flirty dresses. Swift shifted stylistic gears drastically with 2017's darker and moodier Reputation. Her music and her look were edgier and more mysterious, complete with snake imagery. Even the Reputation merch drops reflected this aesthetic change.

Clearly, apparel and accessories are a carefully considered elements of Swift album cycles. Anything is possible regarding her upcoming collab with McCartney. But one thing is for certain. There's no way this fashion pairing won't be amazing.

More like this
Rita Ora Joined The Cut-Out Trend With These Bejewelled Butterfly Trousers
By El Hunt
Beyoncé Wore A Golden Sheer Gown At Her VIP Dubai Concert
By Sam Ramsden
The Ticketmaster Senate Hearing & Taylor Swift Tickets Debacle, Explained
By Jake Viswanath
Taylor Swift May Miss The 2023 Grammys For Reasons Fans Know “All Too Well”
By Jake Viswanath
Get Even More From Bustle — Sign Up For The Newsletter
From hair trends to relationship advice, our daily newsletter has everything you need to sound like a person who’s on TikTok, even if you aren’t.