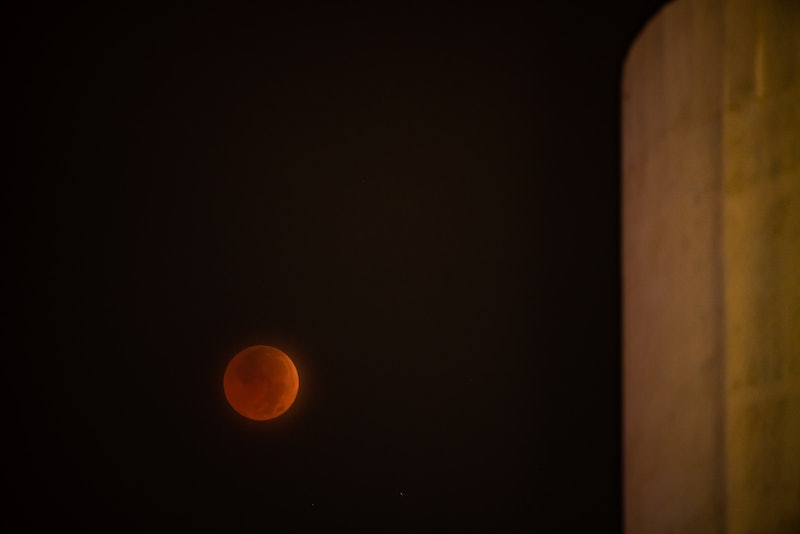 For the first time since the year 2000, January's full moon will include a total lunar eclipse that will be visible in both North America and South America at the same time. So you'll want to know when to see the January total lunar eclipse, because if you miss it, you won't get another chance to see one from the U.S. until 2058. While lunar eclipses occur about once a year, total lunar eclipses of super moons that are evenly observable from both North and South America are rare. And unlike other celestial events like new moons or blue moons where there's nothing spectacularly visible to observe, January's full moon will deliver. Aka, there's a lot to see, so let's make sure you know everything you need to know about how to get a good view and when.

The total lunar eclipse will take place over the "blood moon," which it's called merely due to its reddish color — nothing grim at all. Starting at 10:30 p.m. ET on January 20, the moon's surface will begin to be covered by the Earth's shadow. After two hours of the Earth upstaging the moon, totality will take place. At 12:12 a.m. ET on January 21, the moon's surface will be entirely obscured by the Earth's shadow, giving it a rusty red appearance that's far dimmer than usual. The moon will appear red, as opposed to any other color, as red light is most resilient, even when it's bent and refracted from the Earth's atmosphere. Add dust particles and volcanic ash to the picture and reds, oranges, browns and other rusty colors are going to be the ones responsible for giving the moon a color.

The moon will appear reddish for a full hour, before the Earth's shadow begins to recede from the moon's surface. During this hour of eclipse, stars will be easier to see without the bright glow of the moon in the way, so if you have a telescope, you'll want to check out the Beehive Cluster of stars that will be extra visible on this night.

The entire eclipse event will take about five hours to complete. If you're up for a long night outside, you should totally go for it. But if it's cold where you are, or you don't have five hours to crane your head up at the sky, you might want to just set your alarm for just before midnight and catch the biggest moment of the night before heading off (or back) to bed.

That said, of course the moment of totality isn't at midnight for everyone, only those of us on Eastern Time. Depending on where you're watching from, you'll have to translate the time. The Universal Time of the maximum eclipse is at 5:12 a.m. on Jan. 21., so plan accordingly. And of course if you can't get outside to see the eclipse, you can check it out online. Time and Date will be live streaming the event and of course when you wake up in the morning, you'll get a solid dose of blood moon content on Instagram. To keep up with eclipse footage on Twitter, check out the hashtag #TotalLunarEclipse starting on Jan. 20.