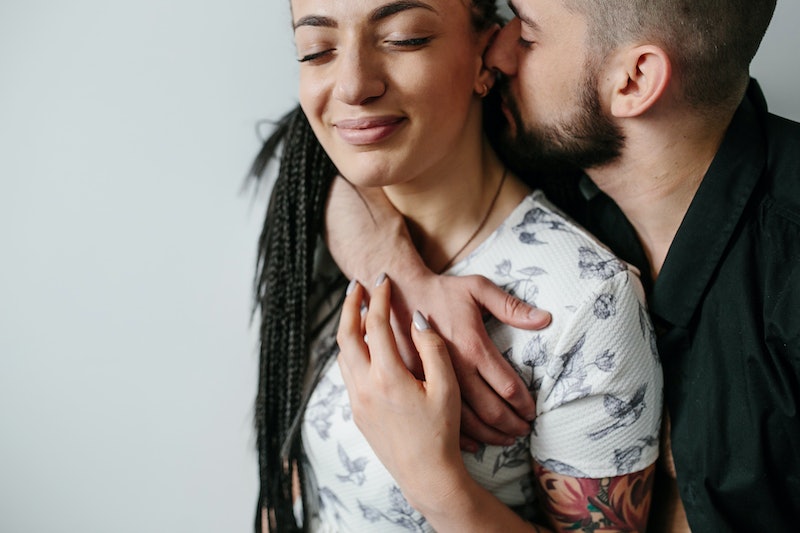 Talking about money is difficult at the best of times, but talking about money in a relationship is really tough — but so necessary. “Money is a major cause of anxiety in relationships,” New York–based relationship expert and author April Masini tells Bustle. “People are not usually honest about money — until there is a problem.” And it can be a big problem. Talking about it can bring up so many issues, like upbringing, gender dynamics, personality, and more. It's a loaded area and one a lot of us like to ignore.

“Things change," Masini says. "Money in relationships is a constant. Deal with it or face anxiety.” Tough words, but true. It's so important just to jump in with both feet. And the more you do it, the less awkward it becomes. Which is true of pretty much any awkward conversation topic — though it doesn't make it any easier to start talking.

So how far into a relationship do you need to start talking about such a big issue? Well, right away. Sort of.

It's a great idea to at least get money out in the open soon — really soon. "Your first date can be a great opportunity to test the waters and see how the person you’re meeting responds to a simple conversation about money," Emily Bouchard, a certified money coach, tells Bustle. "Start with paying the check and be "confident and happy to discuss money in the context of paying the bill you provide them with an invitation to show up and meet you there."

You don't need to share what's in your savings account when you first start dating, but be open about money and try to alleviate any awkwardness around it. If you create a foundation where money is a topic open for discussion in the beginning, it will help you out in the long run.

That being said, talking about money in an open way is way different than revealing your personal finances and exposing yourself in what can be a really fraught area. But at some point you need to do that, too. "Talking about money can also be a challenge because it’s symbolic of so much more," Alexa von Tobel, founder and CEO of LearnVest and author of the New York Times Bestseller, Financially Fearless, tells Bustle. "Rather than just being about dollars and cents, an honest money chat is a much more intimate reveal of beliefs and values, expressed through how you spend. The discussion can and should eventually lead to your biggest dreams, hopes, and fears, so young couples can feel vulnerable when discussing those topics with each other —especially if it’s the first time they’ve broached them in a romantic relationship."

Whenever your money starts to mesh, that's when you have to have the real big chats. My girlfriend and I started talking about it when we were booking large (and expensive) holidays together, but really got into when we were moving in together. But we already had a pretty strong history of being open about it, so we had a good idea of each other's attitudes and where we were coming from. We just finally got into the nitty gritty — and it wasn't as painful as you might think.

Starting to talk about money early will help you out in the long run, but don't be afraid to get into the tough stuff as your lives start to become more intertwined. You'll know when it needs to happen.