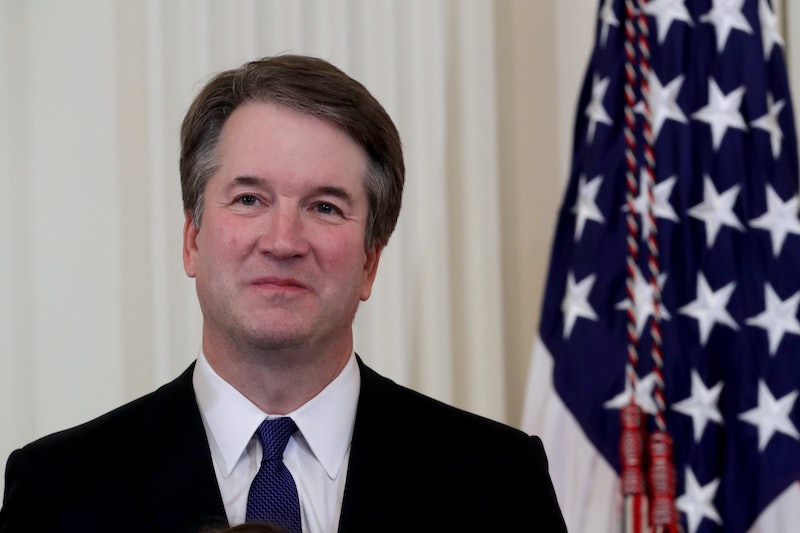 So, the news is out. Trump has picked his second Supreme Court nominee, and the lucky winner is a current U.S. Court of Appeals judge for the D.C. Circuit. If you're wondering when Brett Kavanaugh's Senate confirmation hearing will be, though, you may have to keep wondering for a bit longer.

ABC News reported that Senate Majority Leader Mitch McConnell has promised to hold the confirmation hearings for Kavanaugh in September or October — before the midterms in November. However, there are numerous factors that could slow down the process of getting Kavanaugh confirmed.

Kavanaugh's nomination faces a challenge in the Senate on a strictly numerical basis, because, as The New York Times noted, the Republicans couldn't hold a smaller majority in the Senate. Arizona Republican Sen. John McCain is fighting a battle with brain cancer back at home, and with him unavailable to cast a vote, there are only 50 Republican senators and 49 Democrats. If the Democrats can convince one or two moderate Republicans to cross over — and there's potential, given Maine Sen. Susan Collins' stated dedication to Roe v. Wade — then they could throw a real wrench into the proceedings for McConnell.

On the flip side of that, though, moderate Democrats crossing over could also smooth things over in the other direction.

According to The Atlantic, the lengthy fight over those moderate senators on both sides of the aisle has already begun, and it could make the process significantly longer. Democrats in particular know, as The Atlantic noted, that confirming Kavanaugh to the court will shift it to the right in a big way — and so while they have yet to nail down any concrete strategy that's likely to stop the nomination, they're likely to pull out all of the stops.

And while Kavanaugh has a long record on the court, and therefore all sorts of experience that has prepared him for this potential new position, that long record is actually something that Senate Democrats are likely to draw on in order to slow down the process. The New York Times reported on Saturday that McConnell had actually tried to nudge Trump away from choosing Kavanaugh, because he believed that Kavanaugh's 12 years on the federal bench, plus his prior experience as a top lawyer in Republican circles, could gum up the process. The number of pages of documents regarding Kavanaugh's decisions that the Democrats could request for review could number over a million, The Times reported.

The Times also noted another worry of McConnell's — that Democrats might bring up Kavanaugh's history with the Bush administration, where the Supreme Court nominee played a significant role. Questions about that time in Kavanaugh's life — as well as his experience working with independent counsel Kenneth Starr during the Clinton administration — will almost certainly come up. These are not questions that any of the other potential nominees would have had to deal with, and they could be a boon to Democrats with Kavanaugh.

According to The Times, the next step in Kavanaugh's confirmation process will be the so-called "courtesy visits" that he will begin making with members of the Senate, where the senators will have the opportunity to speak with him about his legal philosophy and prior decisions more closely. According to CNN, Republicans are confident so far they will be able to get Kavanaugh approved, ideally before the next Supreme Court session begins in October and well before the looming midterms, when there's a chance that the balance of Congress could shift. Whenever the confirmation hearings actually takes place, though, you can at least count on them being very heated, and very partisan.