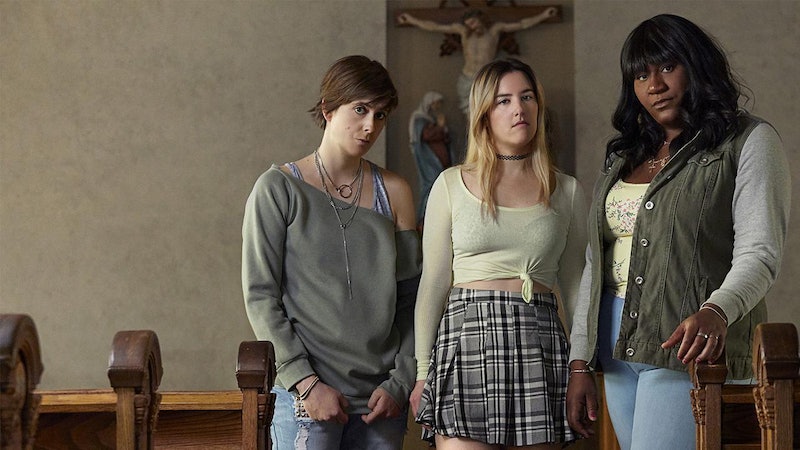 Can You Hear Me? is a breath of fresh air. It's a realistic show following the lives of three friends trying to succeed despite their lack of money, resources, and opportunities — all while maintaining a sense of humor about their circumstances. The show's first season is on Netflix now, and for those who fall in love with this friend group, you don't need to wonder will Can You Hear Me? return for Season 2 — it's already got the go ahead.

So when will Can You Hear Me? return for Season 2? The show's bold, unique style might've been a gamble, but Télé-Québec and affiliate stations (including Netflix) doubled down almost immediately, renewing the show for a second season just a few episodes into the first back in January 2019.

The Canadian television series follows the lives of longtime friends Carolanne, Fabiola, and Ada, highlighting the difficulties of the disadvantaged, and how poverty impacts every aspect of one's life. But the show is just as funny as it is dramatic. Show creator and star Florence Longpre´, who plays Ada, said the show's balance of drama and comedy makes it hard to classify. “It’s complex...It is not documentary; it is fiction, but there is an obvious authenticity," she told Eye on Canada. "The characters talk, and are good and bad at the same time, just like in real life. There is no romance. It’s without discrimination, without mockery, without judgment. We are in what Americans call dramedy."

Longpré created the show because she wanted better representation of real lives and struggles on television. "When I was young, I would have liked to see that on TV, to see that every life is important, that you can come from elsewhere and go elsewhere too," she said in a Radio Canada interview.

As for what's to come on the show, Director General of Télé-Québec Denis Dubois said in a press release that "If you like the audacity of this first season, wait until you see the second!"

More like this
Ozzie’s Coming Out Scene With Kitty On 'That ’90s Show' Has Twitter Sobbing
By Brad Witter
The 'Freeridge' Cast Shared Their Hopes For A Potential Season 2
By Grace Wehniainen
Netflix Shut Down 'Bridgerton' S3 Rumours About A “Very Dark” Storyline
By Bustle
Everything To Know About A Potential 'Lockwood & Co.' Season 2
By Gretchen Smail
Get Even More From Bustle — Sign Up For The Newsletter
From hair trends to relationship advice, our daily newsletter has everything you need to sound like a person who’s on TikTok, even if you aren’t.