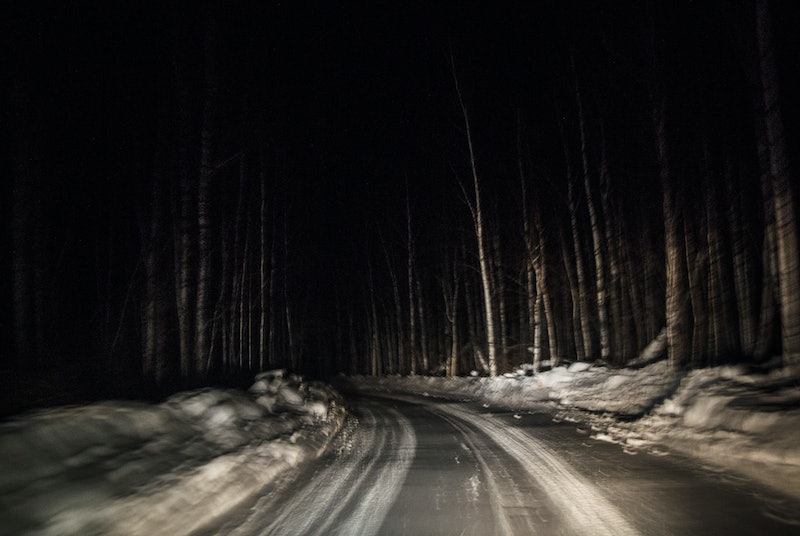 As the frigid chill of the winter season sets in, forcing us to add another layer and brace ourselves before leaving the house, we all have one thing on our minds: how long til spring? Or, at the very least, when will the days start to get lighter in 2019, because dinner time and bed time should never feel so close in proximity. I mean seriously, I gave up on making the bed weeks ago because it feels like I'll be getting right back in it once I get out of it. Typically, people don't start talking about the return of spring until Groundhog Day or even the spring equinox — but they should probably start talking about it sooner, because the mark of the winter solstice is actually the beginning of the end of darkness. I'm not saying winter is almost over of course, winter has just begun, but I am saying that the darkness is technically on its way out.

On Friday, Dec. 21, 2019 at 5:23 p.m. ET, the winter solstice will officially begin and we will experience the longest night of the year and the shortest day of the year for the Northern Hemisphere. The winter solstice marks the exact moment when the sun’s most direct rays of light reach their southernmost point, south of the equator, meaning one of the Earth's poles has reached its farthest tilt away from the sun. Hence why the day is the shortest and the night is the longest. This tilt happens once a year for each hemisphere — once in the winter for the Northern Hemisphere and once in the summer for the Southern Hemisphere. In the summer solstice, when the tilt is reversed, we'll experience the longest day of the year, and the shortest night of the year, marking the start of summer.

Going forward, every day thereafter, the days will be a bit longer and the nights will be a bit shorter. Starting on Dec. 22, the sun will be up for a few seconds longer each day, and gradually those seconds will amount to minutes. After a few weeks, we'll start to notice that we have a bit more time before the sun sets. And after a few months, we won't be mistaking 5 p.m. for 9 p.m., and time will be a bit more predictable. Aka, you won't have those moments when you look at the clock, expecting it to be bedtime, only to see it's 7 p.m. Once we reach daylight saving on March 10, 2019, we'll get an extra hour added to those accumulated minutes and we'll be back in realm of warm, bright days and short nights.

Though the winter season is just beginning, and those colder, snowier, windier, gloomier days are most certainly ahead, and expected to be aplenty, we're officially moving toward lighter days. With a bit more sunlight, the cold will be easier to handle, as it's really just that intense cocktail of darkness and chilliness that makes us feel tired, weak, and in a constant state of bummed out. Chin up, an extra minute a day is on its way.