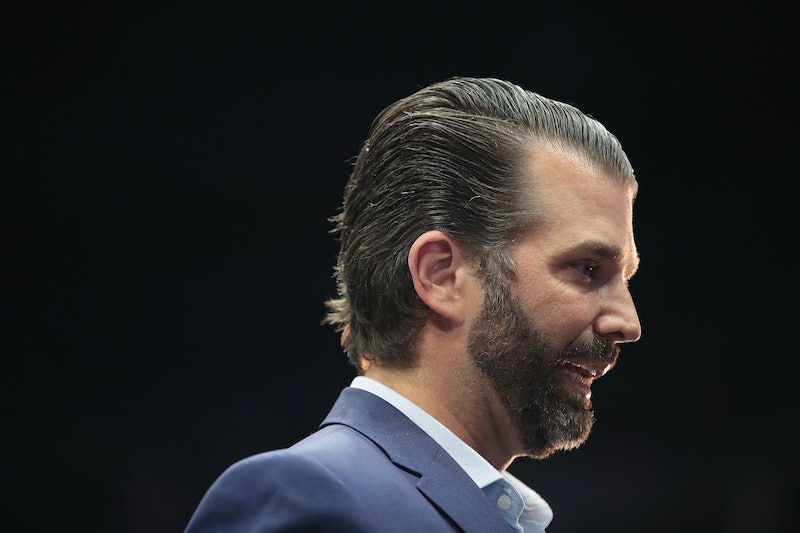 On Tuesday, anonymous sources close to the matter told CNN that Trump Jr. had reportedly reached a "deal" with the Senate Intelligence Committee in relation to appearing before Congress. Per the network, Trump Jr. will appear before the committee in a closed-door setting in the middle of June, although it didn't specify the exact date. Bustle has reached out to the committee's chair Sen. Richard Burr, its vice chair Sen. Mark Warner, and Trump Jr.'s attorney Alan Futerfas for comment.

According to The Post, the president's eldest son will testify in front of the committee for up to four hours regarding a list of specific issues. Citing the anonymous sources it spoke with, CNN also reported that the list will cover "five-to-six topics."

These reports come just a few weeks after Attorney General William Barr released a redacted version of Special Counsel Robert Mueller's report on the federal Russia investigation. The report concluded that it couldn't find any definitive evidence of collusion between the president's 2016 campaign team and Russian figures, but neither does it exonerate the aforementioned groups. It says that both sides sought to benefit from each other.

It is possible, CNN reported based on the unnamed sources' comments, that Trump Jr. will be asked about his previous statements regarding his involvement in negotiating a Trump Tower construction proposal in Moscow, Russia, among other subjects.

In September 2017, Trump Jr. appeared in front of the Senate Judiciary Committee and claimed that he was just "peripherally aware" of the Moscow tower plan. However, the president's former attorney Michael Cohen contradicted Trump Jr.'s claim in front of the House Oversight Committee in February. Cohen told the committee that he met Trump Jr. and Ivanka Trump, a White House adviser and Trump Jr.'s sister, to talk about the proposal "approximately 10 times," Vox reported.

In August 2018, President Donald Trump tweeted that his son indeed met the Russian attorney in order to "to get information on an opponent." But the president justified the 2016 meeting as "totally legal" and a pretty regular activity in politics. He added that it ultimately "went nowhere."

The subpoena for Trump Jr. has clearly upset his father. On Tuesday, the president told the press, "My son spent, I guess, over 20 hours testifying about something that Mueller said was 100% OK. And now they want him to testify again."

If you're interested in learning more about when Trump Jr. will appear before Congress, keep an eye out for more specific updates in the coming days.