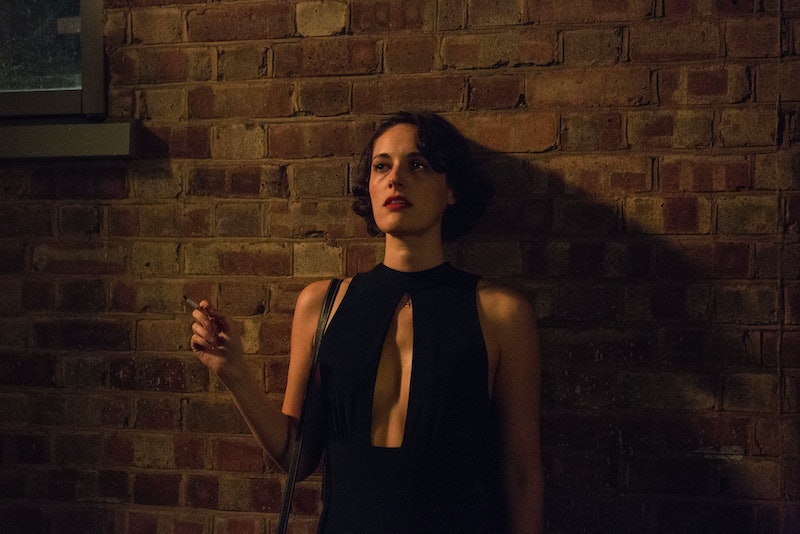 The last insight you had into Phoebe Waller-Bridge — the star and brains behind BBC3 comedy Fleabag — was when she wrote for the monumentally successful 2018 thriller Killing Eve. While that was one of the best shows I saw all year, I'm still sure that Fleabag is Bridge's magnum opus. The show follows a grief-stricken fleabag trying to absurdly patch her life back together after the death of her best friend, with bad sex, bad business, and a terrible stepmother. But will you get to see what's become of her, and if so, when will Fleabag series two air?

"Filming for series two of Phoebe Waller-Bridge’s Fleabag, the multi award-winning hit series produced by Two Brothers Pictures, has begun," the BBC reported on Aug. 23, 2018, much to my own personal relief. It was also reported that all of the original cast would be returning — including the incomparably lovely (or in this specific case, terrible) Olivia Colman. Speaking to the BBC, Bridge professed her excitement, saying how: "I can’t believe they let me do this AGAIN. I’m so happy to be back with the incredible Fleabag team and I’m as surprised as anyone about where this series has taken us."

The script for series two was reportedly finalised some several months ago, with BBC's Comedy Commissioner, Shane Allen calling it a "knockout." He also attests that the script sparkles "with Phoebe’s unique voice that combines a whip smart complexity of character with pin sharp funny lines scattered everywhere."

Allen's also suggested that series two will take a bit of a diversion from the first, as he claimed that "The themes of this series are very distinct from the first series which delivers on the challenge Phoebe set herself." OK, that's all well and good, but when will I get to watch it? Well, it's going to be sometime this year, for sure. "Series 2 of Fleabag will debut on BBC Three in 2019," the BBC confirmed.

Ultimately, the key to series two is to expect the unexpected. "Fleabag's in a very different place in life from where we left her," the show's producer, Lydia Hampson told Dazed on Apr. 5, 2018 "The whole of the first series, it was a façade. She was shiny and prim on top, but you didn't know she was grieving underneath it all. In that last episode, we saw she was broken. We can't go back to pretending she's fine again."

BBC3 gave fans a first look on Nov. 28, 2018 when they posted a screener on Twitter of Fleabag — cig in hand and wistful faced — looking like she might be up to her same old tricks. "An *EXCLUSIVE* first look at series two of Fleabag. Coming to BBC Three soon," the programmer posted, which received a whole horde of happy responses.

Things have got sort of quiet since that update — probably because Christmas and the New Year rolled up soon after — but now there aren't anymore distractions, I reckon the promo can well and truly begin. C'mon, BBC3, roll out that Fleabag series two trailer, please.