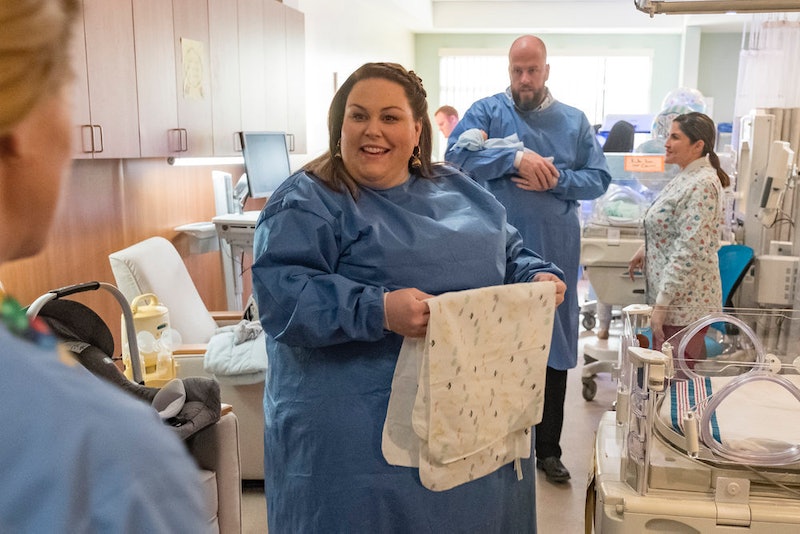 One of the biggest mysteries surrounding the first half of Season 3 revolved around fans trying their best to figure out who the mysterious "Her" was in the This Is Us flash-forwards. And while the fall finale seemed to deliver a huge clue in that regard, we have yet to see the full story unfold on-screen. So when will "Her" be revealed on This Is Us? Even if we now know the person's identity, there are still quite a few details missing from this puzzle.

This storyline began at the very end of Season 2, when a future, older version of Randall went to go visit his now grown up daughter, Tess, at work to tell her, “It’s time to go see her,” and Tess responded by saying, “I’m not ready.” Randall echoed that sentiment by admitting: “I'm not either." Since then, viewers have been desperately searching for clues to figure out who this unknown person could be. Then in November, that answer seemed to be confirmed when another glimpse into the future showed Beth working at her very own dance studio and getting informed that her family (Randall and Tess) were on their way to her.

"We’re all going to see Randall’s mother,” Beth explained, right before adding: “Oh, did you bring the Pin the Tail on the Donkey from the office? I promised I'd bring it.”

Taking all of that into consideration, it appears as though Rebecca is the "Her" in question and is still alive at this point in time, though, it's still unclear what's happening to bring the whole family together and why they don't seem to be very exited about it.

Given that Rebecca would be significantly older at this point in the future, an easy assumption to make would be that Rebecca is ill and that this gathering is meant to be almost like a goodbye party for her. Then again, this show isn't exactly known for its predictability, so it's very possible something else could be at work here that will throw another shocking twist into the mix.

When asked about Rebecca's role in the flash-forward scenes, series creator Dan Fogelman told Entertainment Weekly that there's still a lot to unpack from the small snippets of scenes from the future we've been privy to thus far. "The only thing that is made clear at the end of this episode is that they’re going to see her," Fogelman told the outlet, adding:

"We certainly answered the question about who everyone was going to see, who everyone’s been talking about. Exactly what that looks like and what that is — it takes a lot more present-day story to fill in the gaps to understand the future."

As for when we can expect the show to further fill in some of these blanks, Fogelman remains as vague as ever. "The answers will come, and it becomes a very big part of the show," he teased to EW. "But we are doing a multiple-season television show, so it will take a minute to see the rest of that puzzle take shape."

But given that the episode for the Season 3 finale is titled "Her," it's safe to assume we'll at least get a little more information about what's going on with Future Rebecca, however, there's a decent change part of this mystery could continue on into Season 4 and beyond. (That is, if the series does get picked up for a fourth season, which it undoubtedly will.)

In fact, Susan Kelechi Watson, who plays Beth on the show, teased to reporters during the TCA press tour back in January (as per Entertainment Tonight) that this particular storyline will be tied to the end of the series. "We answered some of it at the end of the fall finale, so the clues are going to be dropped in the same way," Watson stated. "But according to when — at what point — I think this is something that we really see at the end of the series."

So buckle-up, This Is Us fans, because this is one mystery that could be hanging over our heads for quite some time.