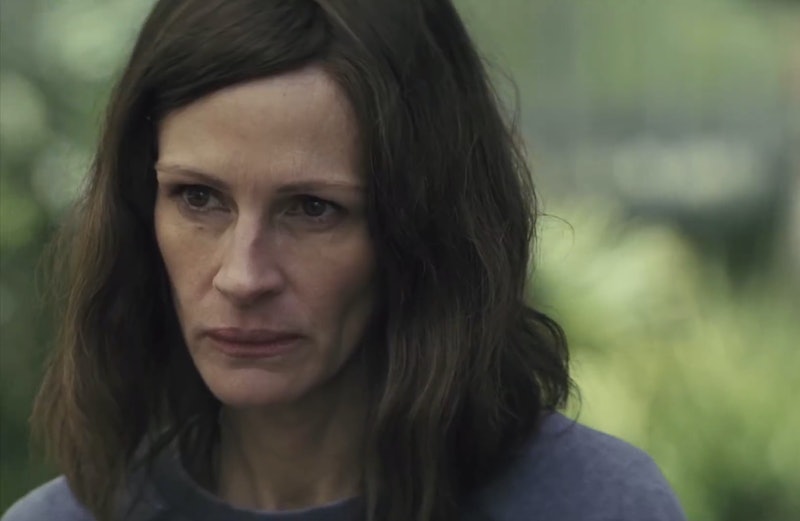 If you’re obsessed with Julia Roberts’ latest project, in which she plays a conflicted caseworker at a secret government facility, then you’re in luck — more episodes are guaranteed, but it’s still unclear exactly when Homecoming will return for Season 2. According to Deadline, the series was picked up by Amazon for a two-season order right off the bat, way back in July 2017. The news came just months after the debut of the fictional podcast on which it’s based, also called Homecoming, became a hit. There’s no word yet on when a new batch of episodes will be released, but if it follows the pattern of the first season, Season 2 might be expected around October 2019. Still, streaming services have a bit more flexibility than traditional networks, so that’s certainly not set in stone.

TVInsider reports that the brains behind the podcast, Eli Horowitz and Micah Bloomberg, also serve as showrunners on the series, so fans of the original source material can expect it to stay pretty close to the content they know. The article also states that the show follows Roberts’ character, Heidi, through two separate timelines — one in which she’s working at the agency, and one in the future, in which she’s a waitress, and doesn’t remember details of her past career.

The show pieces together clues of how her life went so awry, and Roberts told the outlet that this type of situation was a challenge to portray. "It was tricky as a performer,” Roberts said. “Sometimes I would have to sit down and assess what, at that point, Heidi knows, thinks she knows or knows is or isn’t true. It becomes fascinating, the idea of memory. Is it better to not remember? Or to have to face certain things?"

It’s a good thing that viewers doesn’t have to wait anxiously to hear if it’s been renewed or not — so far, reviews have been great, and that's usually a pretty strong indication that fans will like it, too. Though it's yet to be determined how viewers will actually feel, early buzz bodes well for those who hope Homecoming has a lengthy future ahead of it.

Rolling Stone’s Alan Sepinwall called Homecoming a “hypnotic blend of old-school and new,” and praised Roberts’ “specific and modulated performance.” Rotten Tomatoes critics have given Season 1 a stunning 96 percent positive rating, and Vulture’s Jen Chaney said the program was “the TV equivalent of a head without a hair out of place,” and that it “never once loses its thread.”

Homecoming could be just what television needs right now. A bona fide movie star like Julia Roberts helming an intense, mysterious drama with snappy half-hour episodes is basically what any overloaded TV lover needs. Amazon has proven its ability to bring compelling stories to its service — The Marvelous Mrs. Maisel, The Man in the High Castle, Catastrophe and more make up its budding roster. As it stands now, Homecoming looks like it’ll become one more success to add to the ranks.