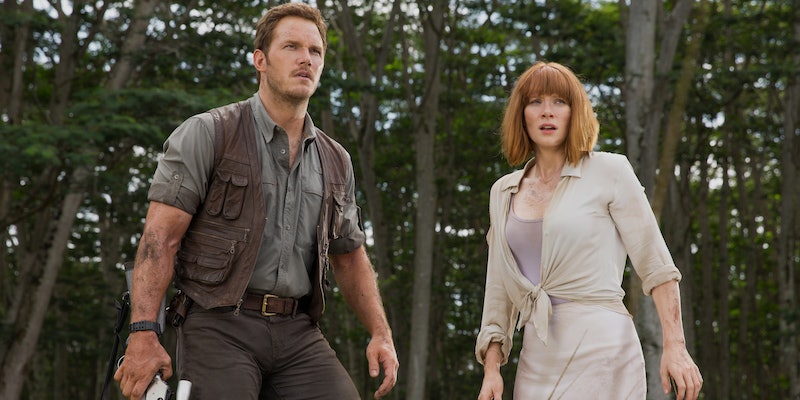 Earlier this week, Bryce Dallas Howard shared a "Day 1" photo from the as-yet untitled sequel to 2015's Jurassic World on her Twitter. Howard will be reprising her role as Claire, the hyper-organized operations manager who sees all her plans for a well-run, safe-as-houses family park go awry when (surprise!) the entertainment asserts its independence. Her co-star Chris Pratt (dinosaur trainer Owen) will be back as well. According to The Hollywood Reporter, the Jurassic World sequel will be in theaters in June, 2018. With over a year to wait for the franchise's next installment, you may be wondering when Jurassic World will be on Netflix. Well, I have good news and bad news.

Let's get the bad news out of the way first: Jurassic World is not currently available on Netflix streaming. And Netflix hasn't announced a date for its arrival on the service. Jurassic World is currently available for HBO subscribers to stream on HBO Now. Otherwise, the dino drama can be rented or purchased on the usual outlets, including iTunes, Amazon, and Fandango Now.

The silver lining here is that Netflix is about to acquire a backlog of prehistoric action. On Mar. 1, the original Jurassic Park trilogy will again be streaming on Netflix. That's right: Jurassic Park (1993), The Lost World: Jurassic Park (1997), and Jurassic Park III will all be at your fingertips. Though none of them can boast Chris Pratt in a vest prompting raptors to get-in-formation, they all have a little something to offer. Here's why the charm of the first three Jurassic Park movies will never go extinct:

Effects That Stand The Test Of Time

The combination of animatronics and digital technology created creatures both serene and aggressive, inquisitive and terrifying. Add Steven Spielberg's talent for upping the tension with a tapping talon or a flared nostril, and the first three Jurassic Park movies have aged better than many films born in the early days of CGI.

The pseudo-science of the Jurassic Park movies is at least based somewhat in fact. So while it's comforting to know that it's probably not possible to hatch a T-Rex in a lab, it's always cool to hear how that process might go down. Also, I'll never look at amber jewelry the same way again.

There's an Ian Malcolm-shaped hole in Jurassic Park III, and that's where my heart cries.

A Hard-Won Respect For Nature

Not to dwell on Ian Malcolm, but he did sum it up best: "Life, uh, finds a way." Every Jurassic Park movie is an argument — a tall, toothy, flesh-eating argument — against human arrogance and playing God. Nature cannot be denied, so matter how many security protocols are put in place. Ask any of the "red shirts" who were ripped apart to prove that point.

One of John Williams' finest.

Jurassic World hasn't made the leap to Netflix streaming yet and its sequel is still 16 months away, but the first three Jurassic Park movies are now available to watch over and over again.