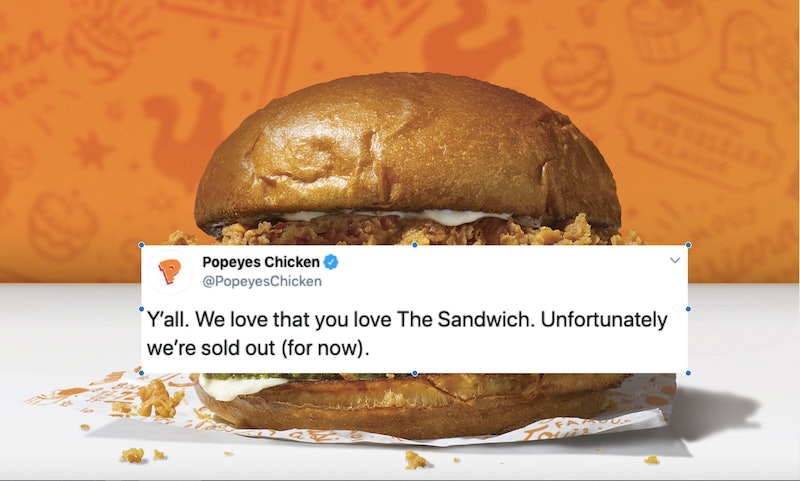 In the iconic words of Miley Cyrus, Popeyes "never meant to start a war," but it seems that its new Chicken Sandwich truly did come in like a wrecking ball — according to a statement released from the company on Tuesday, Aug. 27, Popeyes will sell out of the Chicken Sandwich by the end of the week. The menu offering, now just as iconic as it is infamous, has only been available since Aug. 12; if you're wondering when the Popeyes Chicken Sandwich will return, then stay tuned, because we certainly haven't seen the last of it yet.

A bit of background, if you're not up to speed with the cultural phenom that is this month's chicken drama: Popeyes, despite being well-known for its fried chicken, never actually offered a sandwich on the official menu before. While excitement for the new offering was anticipated, apparently America went through the clucking roof.

"We have seen an extraordinary demand for the new Popeyes Chicken Sandwich following our nationwide launch on August 12," said a statement from Popeyes provided to Bustle. "It has been amazing to see our guests share their love for our brand and for the new Chicken Sandwich on social media and beyond, and we are truly humbled and grateful for their support. The demand for the new Chicken Sandwich in the first few weeks following launch far exceeded our very optimistic expectations. In fact, Popeyes aggressively forecasted demand through the end of September and has already sold through that inventory. As a result, Popeyes restaurants across the country are expected to sell out of the Chicken Sandwich by the end of this week. We, along with our suppliers, are working tirelessly to bring the new sandwich back to guests as soon as possible."

If you didn't manage to snag one of the Chicken Sandwiches, or you want to take a trip down memory lane, here's a video that Popeyes shared in a tweet regarding the availability of the menu item.

In case you don't have strong opinions about fried chicken or didn't log onto Twitter this week, the Popeyes Chicken Sandwich reached such social media heights that it did, in fact, incite a Twitter war — brands including and not limited to Wendy's, Chick-fil-A, and KFC all joined the fray, trying to herald their own chicken sandwiches over Popeyes. Memes were memed. Loyalties were tested. And apparently, a lot of chicken was consumed.

Enough chicken was consumed, in fact, that reports of Popeyes locations running out of stock for the menu item came by Aug. 20. While the low stock may be a disappointment for fans, it will likely serve as a breather for employees, given reports of some employees working up to 60-hour weeks to keep up with the unprecedented demand. And Popeyes is assuring fans that this isn't the last they will see of the Chicken Sandwich — the chain is advising customers download the Popeyes app, available both in the App Store or Google Play, to keep up-to-date with when the sandwich will make its return. Hopefully by then enough of the fervor will have died down so that people can go back to eating their chicken in relative peace.