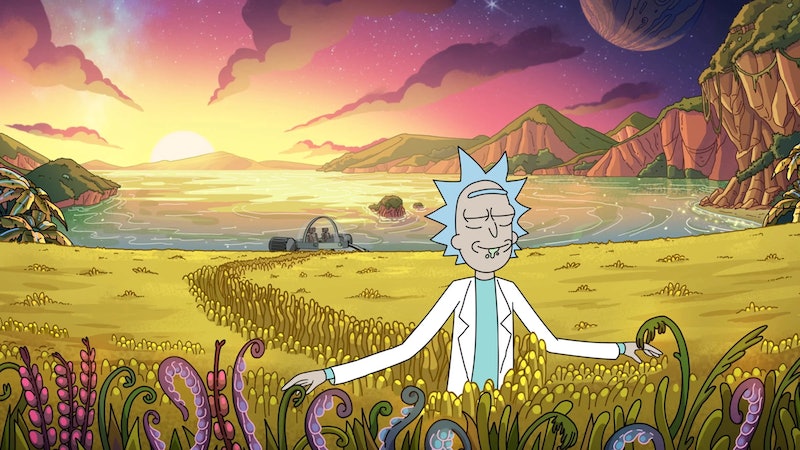 This weekend, Adult Swim aired the final episode of the cult-classic show Rick and Morty's Season 4. While the first 5 episodes of the season launched in November 2019, the network decided to wait an unprecedented 5 months to drop the following 5 episodes. But now that they're out, fans are already wondering, when will Rick and Morty return for Season 5?

When the show was picked up for Season 4, it wasn't the usual one-and-done renewal deal. Adult Swim ordered a whopping 70 episodes. Described only as "a long term deal," the order doesn't impose any kind of time frame or schedule on when those episodes will be released. Currently, a typical Rick and Morty season lasts 10 to 11 episodes. So given the episode order, fans could see up to seven more seasons of the show's inter-dimensional adventures. But with the year-and-a-half hiatus between Seasons 3 and 4 — and Season 4's split into two drops of 5 episodes each set months apart — what will a Season 5 look like, and when will fans get it?

Show creator Justin Roiland believes in the streaming era, dropping an episode a month is the way to go. "If you do one a month, the show is alive the whole year and you’re still buying us all the time we need to make them as good as they need to be," he told SlashFilm. While that might sound frustrating to fans, Roiland points out most viewers binge the show on their own schedule. "That just goes to the point that I have no idea what the plan is for Season 5."

And that decision might be a while in the making. Though Roiland said Season 5 is "mostly in the can," voice actors Chris Parnell and Sarah Chalke point out that's only on the writing and animation side of production. Speaking with IGN, Parnell said that as of May, "We have not started recording Season 5, but I know they have, certainly, episodes written and have it boarded to a certain extent. But I don't know when we'll start recording." Chalke confirmed with Digital Spy that while the voice cast recorded Season 4 pickup lines from home, "Season 5, we haven't read yet...they're writing it already." She added they'll probably hold off recording Season 5 until, "if there was an option...when we could record back at the studio."

With studios remaining shut down for the indefinite future to prevent any further spread of the coronavirus, it's uncertain when and if Rick and Morty will have the option of in-studio recording. So it looks like the team will have to get creative.