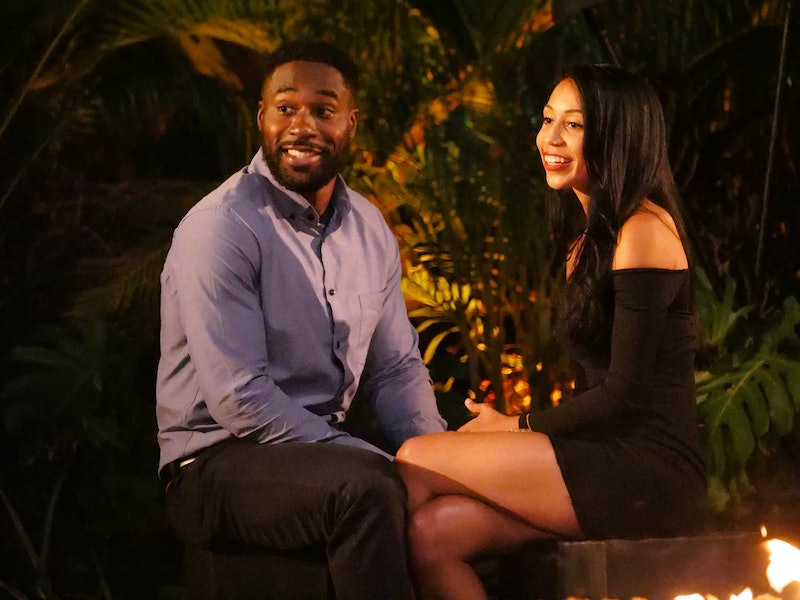 After several emotional bonfires, Temptation Island's only surviving core couple, Shari and Javen, are officially getting married. During the season finale, the two were reunited after being separated on the island for three weeks — a time they each embraced by getting to know themselves better as individuals. But they were so happy to see each other again. Javen was especially thrilled to see Shari and couldn't stop showering her with compliments before finally popping the question. "I love the heck out of that girl," he said. "She is really something special to me." And with that, our hearts all collectively melted.

Javen went on to tell Shari that he never stopped thinking about her the entire time they were apart, and Shari apologized for being cold and standoff-ish in the past. She was hesitant about what the island had to offer at first, but "Once i embraced the process," she said. "I realized how much I can learn from these amazing people."

They each learned how to develop, nurture, and make room for platonic friendships with people of the same gender while maintaining their romantic relationship — which is something they struggled to do in the past. "Coming to the island, I assumed I knew everything about women," Javen said on the show. "And I had to factory reset myself." He had to learn how to open up and give everyone an equal chance to do the same.

They each learned to be more vulnerable with themselves and each other, which is key to successful communication in a relationship — and a large reason that, despite coming into the island fighting, they emerged as the strongest couple. "I feel a lot stronger as an individual," Shari said to Javen after he got down on one knee. "I want to be light-hearted and open. I feel like you deserve that."

Fast-forward six months from the filming of the finale, and Javen and Shari were well into wedding planning. Other than that, Shari said, "life has gone back to normal-ish." Javen, on the other hand, was feeling the blow to his pockets thanks to the impending nuptials, but he wouldn't have it any other way.

"Planning this wedding is going to be a battle," he said. "I know Shari, she's very picky." But it sounds like she doesn't have time to be overly picky, because Javen said he wants to get married in the next six months. Shari agreed, which means they could be getting married as soon as this summer.

Judging by their castmate Kaci Campbell's new hair color debut, the six-month check-in was filmed somewhere around early to mid-February. Of course, Shari and Javen haven't shared any updates about their wedding since then, since they couldn't reveal the proposal ahead of the Temptation Island finale. However, Kaci did drop a small tidbit during a recent interview with Bustle. "They're like my best best friends for life," she said of Shari, Kady, and Nicole. "I actually think we're going to be in Shari's wedding."

Now that their season's air time has come to an end, Shari and Javen can be a lot more public with their future plans. So who knows, there could be a lot more than a wedding in store. Perhaps a Temptation Island honeymoon?