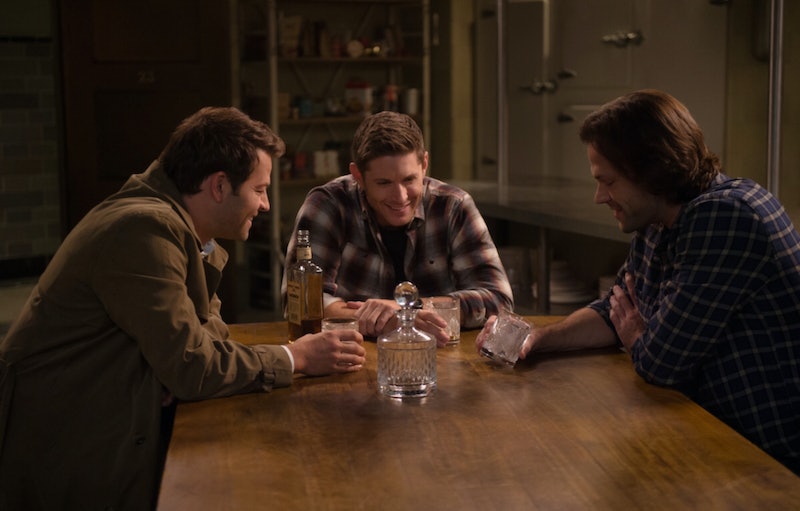 Supernatural has spent years cultivating a dedicated fanbase, and they’re one that won’t want to wait long after the show’s Dec. 13 midseason finale for more Winchester adventures. Luckily, the network will be quick to bring back Supernatural after the holidays. Supernatural Season 14 will return on Jan. 17 at 8 p.m., according to Deadline.

The show follows two supernatural villain hunters, brothers Dean and Sam Winchester, as they scuffle with demons and occasionally try to thwart the apocalypse — no big deal. The series’ characters have found themselves in plenty of outrageous circumstances since it debuted in 2005, and it’s showing no signs of stopping. Variety reports that Season 14 will have a total of 20 episodes, and as the midseason finale is only the ninth, there’s plenty more for fans to look forward to before a true season finale.

According to Digital Spy, Supernatural is currently the longest-running series in CW history, although it was actually only planned out originally for a five-season run. Later this season, Supernatural will hit a milestone 300 episodes aired, and stars Jensen Ackles and Jared Padalecki have said in the past that that’s an important number they’re gunning for. “In a marathon, I keep my sights on that next mile, wherever that might be,” Ackles told Entertainment Weekly in 2016 ahead of Season 12. “And 300’s a good number to work for.”

They even hinted at the time that 300 episodes might mark the beginning of the end for them. “If we don’t make it to 300, I think Ackles and I will both be truly bummed,” Padalecki said in the same 2016 interview. “When we get to 300, I think Ackles and I will think it might be time to say bye. There’s a chance that changes, but we certainly do not take it for granted that we’re going to make it to 300.”

But, in a much newer interview earlier this year, co-showrunner Andrew Dabb insisted that viewers shouldn’t worry too much — Supernatural is probably sticking around at least a little longer. "I don’t think that’s going to be our end,” Dabb told TVLine in March. “I think we’re going to keep going. I think there are more stories to tell. Three hundred is an awesome, awesome benchmark — very, very few shows get there; it’s like us and Gunsmoke — but I don’t think that’s our ending point.”

In the same piece, Padalecki and Jenson also walked back their original comments about saying goodbye to their characters. “I am consistently amazed and impressed by our writers and the direction,” Padalecki said. “I think maybe when I said 300 [episodes], I just didn’t know if we’d keep the quality up, but the quality is higher than it’s ever been. I love the storyline, I love what’s going on with the brothers, with the friends, with the family. So I love being a part of telling the story, and as long as they’re willing to keep picking us up, then count me in.” Jensen added that 300 was a “nice benchmark,” but not necessarily the final one he wanted to hit.

There’s still so much Supernatural could do with its story — in a world full of fantasy, there’s no telling what turn it might take next. The people behind the camera and onscreen both seem to be enjoying themselves more than ever, and fans will surely be along for the ride as long as they allow it to continue.