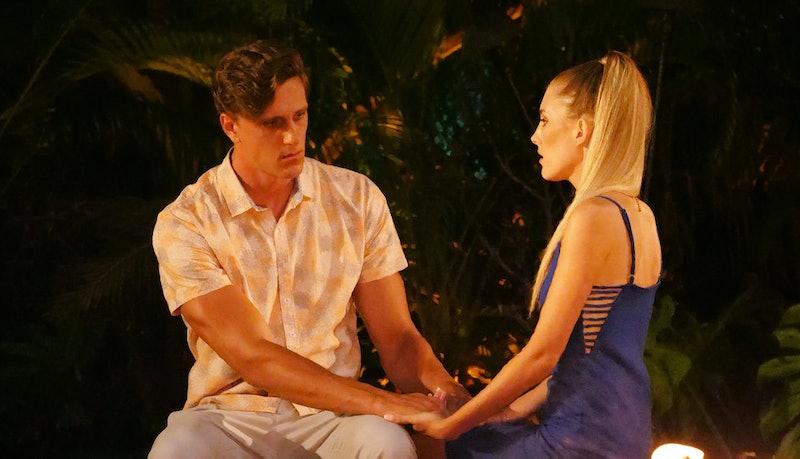 If you're a fan of messy romantic drama and early 2000s reality shows, you're in luck. Temptation Island was renewed for Season 2 just a few weeks ahead of its season finale, and you might not be waiting long for new episodes. According to The Wrap, the new batch of couples will be hitting the sands to film later this year, which means you can reasonably expect Season 2 to air in early 2020 — perhaps in late February, when the first season of the reboot premiered.

Per USA, the second season of Temptation Island will have 12 episodes, up from its 11-installment freshman run, and will include a reunion special. The premise of the show will remain the same — why mess with a perfect, tear-jerking formula? A group of unmarried couples grappling with long-term commitment head to a tropical paradise where they're split up and paired with singles hoping for their own romance. There's tons of betrayal, crying, and for a lucky few, maybe even renewed hope for their existing relationship. So basically, it's reality TV gold.

USA is actually currently casting their couples and singles for Temptation Island Season 2, so if you're looking to put your relationship to the test, or perhaps find a new love altogether, you can head to their website to apply.

Requirements for couples wanting to participate in the social experiment are pretty straightforward. You have to be 21 or older, in a committed relationship but not married or engaged, and "available to film in a remote location this June and July." The application also says participants will be compensated, and the experiment will be all-expenses paid. What's a little emotional turmoil in exchange for a luxury vacation and a little cash?

The application also lists questions like how long you and your partner have been together, what the best thing about your relationship is, and what's appealing to you about the prospect of dating others to help solidify your existing relationship.

The application for Temptation Island singles is relatively similar — it outlines all the same perks, and asks a few questions about what you're looking for in a relationship, as well as why you haven't found a long-lasting relationship yet. But if you're not quite daring enough to participate in Temptation Island and instead just want to watch the ups and downs unfold from your couch, that's understandable too, and you can rest easy knowing there's more on the way.

Host Mark L. Walberg told TVInsider that though the second and third seasons of the original Temptation Island weren't as big of a hit as the first season, he thinks the show knows what pitfalls to avoid this time around. "It was about promotion and timing. They waited a year and a half between seasons. By then, people had come and gone and moved on," he said. "Now what’s interesting, is there are whole bunch of people who are thinking about it, saying, 'Oh my God! I loved that show. I can't wait to watch it again.' There is an entirely new audience raised on reality TV. They know exactly what to expect."

So if you're one of the ones who can't wait, sit tight. There's plenty more drama coming down the road.