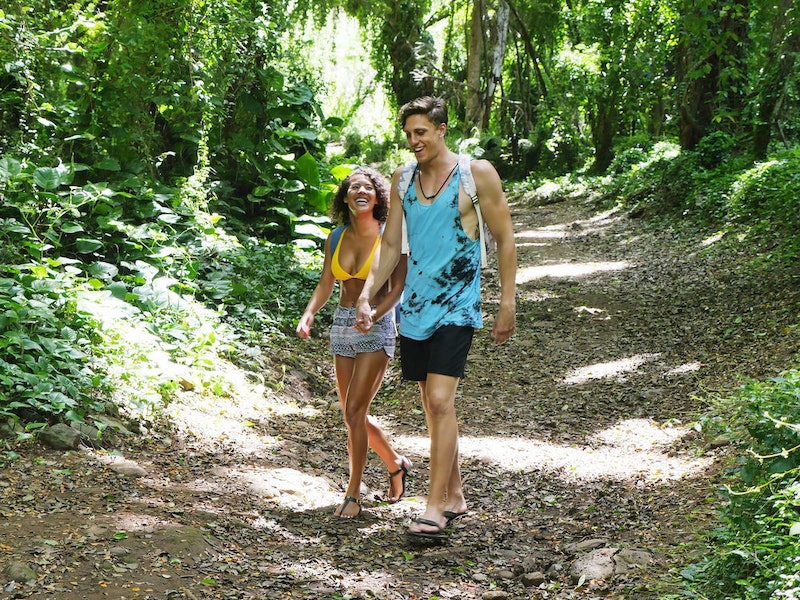 Perhaps the most controversial castmate on USA's Temptation Island reboot is Morgan Lolar. She's one of the many singles on the show meant to tempt the four men in relationships, and well, she's doing a good job. Evan, who's been dating his girlfriend Kaci on and off for 10 years, recently told Morgan he was falling for her. And as the season nears its finale, it will be interesting to see what Morgan is doing after Temptation Island, and if she ends up with Evan at the end.

Of course, like most reality TV show casts, Morgan is bound to a confidentiality agreement that doesn't allow her to reveal too much about her current life — especially when it comes to dating. But she's still pretty active on Twitter and Instagram, where she chats mostly about her job and her thoughts on the episodes as they air.

According to her LinkedIn page, she works as a real estate agent in the Arlington, Virginia and Washington D.C. areas, and she used that job title as a pickup line when she first came onto the show. "Hey guys, my name's Morgan," she said. "I'm a real estate agent and when I find something I like, I know how to close the deal." And right now, she's trying with all her might to close the deal with Evan.

Her LinkedIn page says she's an agent for Keller Williams Realty, which, according to its company description, is the "largest real estate franchise by agent count and largest in the U.S." She's been at the job for a little over two years, and before that, she was a property manager and an administrative assistant.

As you can imagine, Morgan and Evan's relationship hasn't been received well by many viewers, which has resulted in a lot of online hate directed toward her. Thankfully, her resilient and confident attitude has allowed her to shake off the haters with ease.

She's also been pretty vocal about the deceptions of the show's post-production editing. Based off of their live tweet reactions during each episode's airing, she and her castmates seem to be watching for the first time along with everyone else. "There are always THREE sides to every story," she tweeted during the Feb. 12 episode. She later tagged reality TV guru Reality Steve in a longer statement, hoping it would gain some traction. "SINCE I HAVE NO PLATFORM TO STAND UP FOR MYSELF," she wrote. "I did NOT want Evan to send a video to break up with Kaci ... out of RESPECT for Kaci, I wanted him to tell her that he had feelings for someone so that she wouldn't waste the opportunity of getting to know other guys on the island." She closed by saying, "Editing got my ass once again."

Thankfully, many of her fellow castmates have stood up for her and vouched for her honesty. Despite the flying opinions, she seems to have made some lasting friendships on the show. And when she's not watching or chatting with them, she's probably ordering takeout — sometimes $56 worth.

More power to you, Morgan. Sounds like you're living your best life after getting off the island.