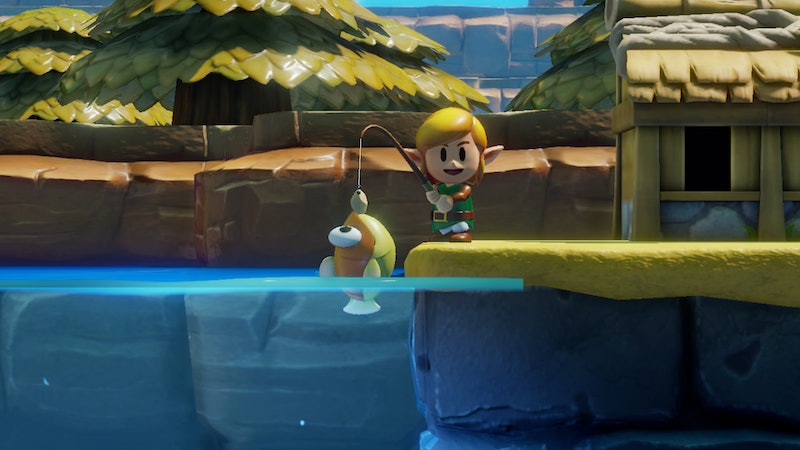 You may still be reeling over the news a sequel to Breath of the Wild is in the works, but don't let that excitement overshadow the upcoming remake of a beloved instalment in the franchise. While Nintendo didn't give an estimated release date for the Breath of the Wild sequel, they did finally reveal when you'll be able to get your hands on the remake of the fourth game in the series. So when will The Legend of Zelda: Link's Awakening be out in the UK?

First teased in early February, Nintendo revealed during their E3 Direct that Link's Awakening will be released this year on Sep. 20. The company also released a longer trailer — sans the animated cut scene shown in the first — which demonstrated how the aspects of the 1993 game have been updated to fit the 2019 market. As was shown in the initial announcement, the top-down perspective of the original game is still front and centre. But thanks to 25 years of tech evolution and the capabilities of the home console, Link's Awakening has been given a new lease of life in an adorable 3D chibi-style with a stunning tilt-shift effect that follows the player as they explore Koholint Island.

Not only that, but players will also be able to create their own dungeons for the first time in the series. As shown in the trailer and demonstrated further during Nintendo's Treehouse: Live segment, the Chamber Dungeon feature will allow players to design their own set of challenges with 'Chambers' they've cleared throughout their adventure, as Gamespot reports. "I've always wanted to create a way for players to create their own dungeons, but I didn't want to make anything too hard," series producer Eiji Aonuma said during the demo. "Just like solving a puzzle, I wanted to make this Chamber Dungeon easy enough for people to play and feel like they're solving a puzzle."

The game also features amiibo support, which can be accessed by any Legend of Zelda character including a new version of Link modelled after the new design. As detailed in the press release, tapping an amiibo while playing the game will let you access "additional chambers in mini-games". And as Gamespot points out, the Link's Awakening amiibo also puts Shadow Link into the dungeon "who'll chase you throughout the dungeon."

You can currently pre-order the new Link amiibo via GAME, and you can pre-order the game itself via the Nintendo UK store. According to Gamespot, Nintendo are reportedly releasing a limited edition for Europe that will include a 120-page artbook and a steelbook modelled after the classic GameBoy. I've reached out to Nintendo for more info as they haven't given an official statement on this edition, but have yet to hear back. I'll let you know when I do or if it's announced.

Link's Awakening marks a throwback to the classic mechanics of the Zelda franchise, which began in 1986 with The Legend Of Zelda, as an action RPG from a top-down perspective for the Nintendo Entertainment System (NES). Link's Awakening was the fourth instalment of the series, initially released in 1993 for the Game Boy.

It followed the same mechanics as the games that preceded it, but instead of taking place in the usual setting of Hyrule the story saw Link stranded on a mysterious island protected by the sleeping Wind Fish. To find his way back to Hyrule, Link has to awaken this mystical deity by collecting special instruments across the island, while battling familiar enemies and exploring dungeons in the process.

While the gameplay of Link's Awakening is a far cry from what Zelda fans are currently used to courtesy of the open-world environment of Breath of the Wild, it looks like Nintendo have managed to make a faithful adaptation of an early part of the series while giving it a new lease of life. Hopefully, with the success that Link's Awakening is bound to bring, the developers will consider giving the three games that preceded it a chance to shine on the Switch in this way, too.