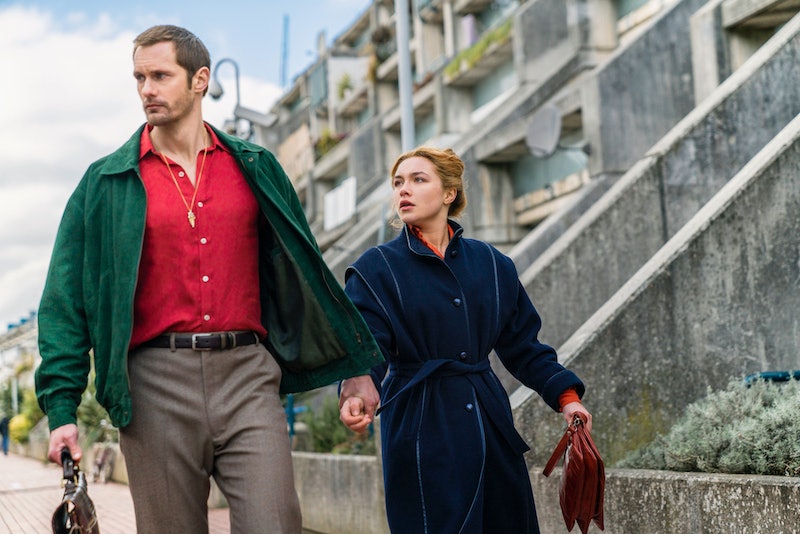 If you thought Bodyguard, The Cry, and Killing Eve were all BBC had up their sleeves this year, think again. Whilst this upcoming drama is not the second season to The Night Manager — *sigh* — it does have the same producers, and is also based on a John le Carré novel. Starring Alexander Skarsgård, Michael Shannon, and Florence Pugh, this is one show that you do not want to miss. So, when will The Little Drummer Girl air on BBC?

There may only be just under three months left of 2018, but it seems that The Little Drummer Girl will be coming to British screens before the year is up. In a press release sent to Bustle UK, the show is described as "coming soon," and according to the Radio Times, the show is set to broadcast later this year.

I contacted the show to see if I could get some further details on an air date, but have yet to receive a reply. The production company's website notes that the show is in post-production, which is the stage before distribution. Here's hoping an air date will be announced soon.

Thankfully though, BBC were kind enough to give a sneak peak of what The Little Drummer Girl has to offer on Monday via an action-packed trailer. Yes, it may be short, but boy does it pack a punch.

From the espionage-y visuals that call back to The Night Manager, the fast pace, and Skarsgård's existence (I mean, c'mon), I am totally pumped for this series. If I'm being honest though, my excitement leans more towards the man behind the camera than the adaptation itself.

Legendary South Korean visionary Park Chan-wook will be directing the six-part mini-series, which will also mark his television debut. If you're a fan of the 2013 film Stoker and the original Oldboy, you'll be familiar with his work. You'll also be familiar with his use of gratuitous violence — especially in Oldboy — and gorgeous cinematography, so expect that in this le Carré adaptation.

But what is The Little Drummer Girl actually about? Whilst it follows in the same vein as The Night Manager with an ordinary person being recruited as an operative agent, the two couldn't be further apart.

Set in the '70s and described as "sharply contemporary" and a "pulsating thriller" in the press release, the story follows Charlie (Pugh), an actress that gets caught up in the world of Israeli espionage thanks to a chance meeting with the "mysterious" Becker (Skarsgård) whilst on holiday in Greece.

Obviously, things take a turn and Charlie begins to "take on the role of a lifetime," acting as a double agent whilst simultaneously "drawn into a dangerous world of duplicity and compromised humanity."

It's unclear whether the mini-series will follow the 1983 le Carré novel completely, but Carré is an executive producer on the series — as he was on The Night Manager — so the adaptation will also be under his watchful eye. He was also involved in the 1984 film based on his novel, where Diane Keaton portrayed Charlie.

If The Night Manager is anything to go by, I think The Little Drummer Girl is going to be one of this years TV highlights, for sure.