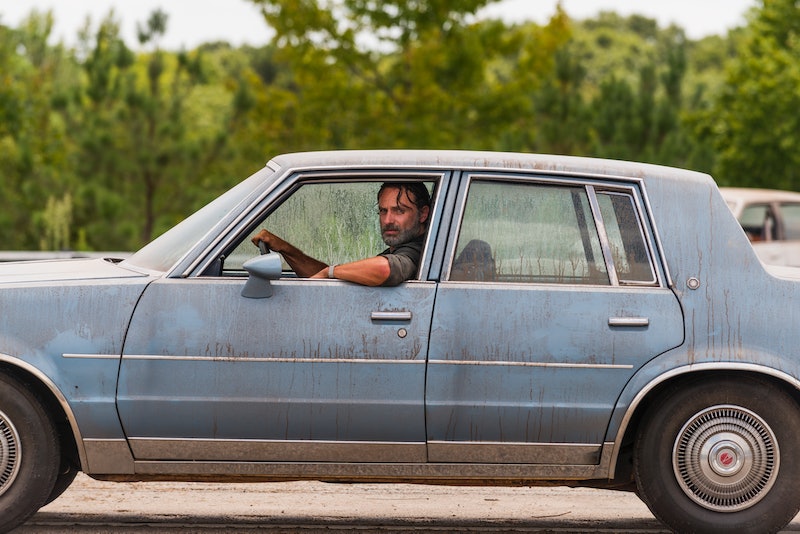 Negan may have just arrived on The Walking Dead this season, but I, for one, am already ready to move on. Unfortunately, in the zombie apocalypse, the next threat isn't necessarily a welcome thing. When are the Whisperers coming to The Walking Dead? The comic book villains that fans of the series have to look forward to will probably show up eventually, but maybe not as soon as we think.

Right off the bat (no Lucille pun intended), let me say that I don't think the Whisperers are the group who sent a scout to follow Rick and Aaron, then spy on Father Gabriel in the midseason finale. While that person was shielding their identity and gender from the audience in a way that resembles this villainous group's philosophy of anonymity, I don't think the AMC series would want to shy away from the Whisperers' most recognizable visual trait — they wear skin suits made out of Walkers. Gross, I know, but effective.

In fact, in a November interview with Comicbook.com, executive producer Scott Gimple said that it was too early to introduce the Whisperers. After confirming that the upcoming introduction of Oceanside would not reveal the comic group, he said, "I will also say, though, that it's not impossible that the Whisperers could come along or aspects of them could come along earlier than the timeline of the book, but certainly not this early."

At New York Comic Con last fall, graphic novel creator Robert Kirkman and comedian Jason Mantzoukas joked about how difficult it would be to just have cast members Andrew Lincoln and Norman Reedus say "whisperer" out loud. This isn't something the show should rush into.

My prediction is that the Whisperers will show up next season, or maybe at the end of this season. I think the war between Rick and Negan needs to really heat up before a new threat can emerge, and that war is just getting started. There are too many groups right now, between the boot spies, the Saviors, the Kingdom, Alexandria, and Hilltop. It's not time for them to unite behind a common enemy just yet.

Editor's Note: This article has been updated to clarify that Gimple's comments about The Whisperers referred to the Oceanside community introduced on The Walking Dead.