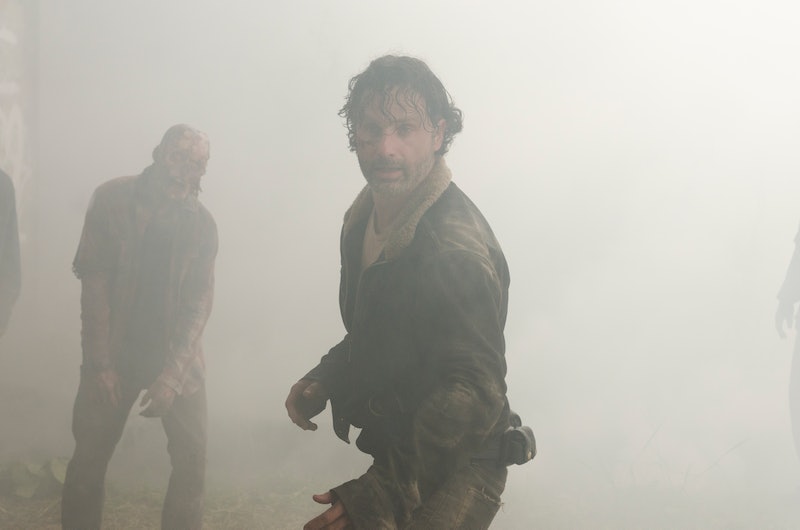 A lot went down in last Sunday's The Walking Dead Season 7 midseason finale, "Hearts Still Beating": two characters were killed (RIP, Spencer and Olivia), another was almost offed (close one, Rosita), and yet another was taken hostage by Negan (good luck, Eugene). In fact, so much was going on that it's entirely possible you might have missed one of the most intriguing aspects of the episode and what it portended for the future of the show — especially if you're not familiar with Robert Kirkman's comic book series on which it's based. But in the aftermath of the midseason finale, comic readers everywhere are wondering if the Whisperers are coming to The Walking Dead Season 7.

If you are still uninitiated when it comes to the show's source material, then you're probably asking two things right about now: who are the Whisperers, and when did we see them? First, the Whisperers are a villainous band of rovers who are distinguished by the fact that they cloak themselves in the skins of zombies so they can move through walker herds at will. Secondly, we technically don't know that we've seen them, although the post-credits scene of the midseason finale hinted at the ominous presence of some unknown foe… and many people are drawing to the conclusion that this is the show's way of teasing the introduction of the Whisperers.

This mysterious someone was first glimpsed earlier in the episode, watching as Rick and Aaron gathered supplies. They (and their mismatched boots) later turned up again in the aforementioned bonus scene, once again lurking from afar while spying on our group of heroes. While those feet could arguably belong to anyone — from Negan acolyte Dwight to Oceanside resident Cyndie — comic fans have largely sworn by the idea that they belong to a Whisperer.

However, it would be surprising to see a member of that infamous group turn up so soon. In the comic books, Rick & Co. don't even hear their first rumblings of the Whisperers until well after the resolution of their battle with Negan and a two-year time jump have occurred. (Their sudden appearance is what forces Rick to join forces with a defeated and imprisoned Negan.) If Season 7 is going to climax with the war between Alexandria and the Saviors, then it would be natural to assume that the Whisperers would be the new threat introduced in Season 8 — not midway through Season 7, before the current conflict is even resolved.

However, showrunner Scott Gimple has already given indications that the series could be speeding up the timeline of its source material when it comes to this new group of antagonists. "It's not impossible that the Whisperers could come along or aspects of them could come along earlier than the timeline of the book," Gimple teased about the fan-favorite villains to ComicBook.com just last month. So while I wouldn't necessarily assume that they'll be unveiled in their full glory when The Walking Dead returns for its midseason premiere in the new year, it's entirely possible we'll be seeing the Whisperers before Season 7 is over.

Perhaps they'll be introduced sooner than we think, and will force Rick and Negan to band together before the latter's ultimate defeat rather than after. Maybe the Whisperers will just be teased with vague hints and warnings throughout the entire back half of the season (like Negan's introduction was slowly built up last year), only for them to finally strike in the finale. Or maybe we will have to wait all the way until Season 8, with only the occasional boot-sighting between now and then to tide us over. In any case, the Whisperers are definitely on the horizon, so Rick & Co. shouldn't sleep too easy once they're done dealing with the Saviors. Their next threat will be lurking right around the corner…