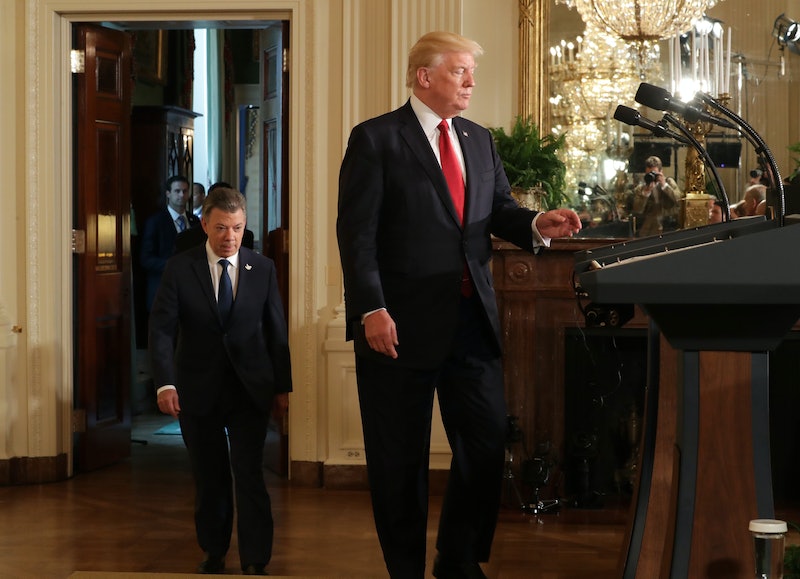 Tuesday, Jan. 30 marks President Donald Trump's first-ever State of the Union address. As the event approaches, many Americans likely want to know key details about how the evening will unfold, including when Trump's State of the Union will end. While Trump's speech is slated to begin at 9 p.m. ET, its end time is up to the president.

Trump will deliver his first State of the Union in the House chamber of the U.S. Capitol. Speaker Ryan and Vice President Mike Pence will be seated behind him and members of Congress, along with Supreme Court justices and members of the president's Cabinet, will be seated in the audience.

Indeed, former presidents have greatly differed when it comes to delivering State of the Union addresses. For example, a study on presidential speech length by the American Presidency Project at the University of California found that some former presidents, like Jimmy Carter and Ronald Reagan, regularly delivered addresses that clocked in at right around the 30 minute mark.

Thus, it remains to be seen how Trump will approach the State of the Union -- and whether or not he will choose to deliver a shorter or lengthier address. However, if Trump's first-ever speech to a joint session of Congress is any indication, the president may veer toward the lengthier side of the speech-delivery spectrum. In his joint session speech in February (which was not a State of the Union address), Trump spoke for just over an hour, making his the second-longest first address to Congress among modern presidents (Clinton's first address was the longest).

Trump's State of the Union will likely be watched by many, particularly because it is his first and because of the controversy surrounding it. Indeed, this weekend the White House described the theme of Trump's speech as being "in flux" because of the recent government shutdown, the impacts of which Trump may (or may not) choose to address in his speech.

Moreover, five Democrats from the House of Representatives have indicated that they will be boycotting Trump's first State of the Union as a result of Trump's divisive rhetoric, particularly because of his recent comments reportedly referring to states in Latin America and Africa as "sh*thole" countries. Trump has denied using this language.

If you do wish to to watch Trump's first State of the Union, you can do so by tuning in to any major television network or cable news network, as they will all be featuring the address. The White House will also be streaming the event live online. Thus, if you so desire, there are many ways to watch Trump's address and see the topics he decides to cover and the length at which he chooses to discuss them.