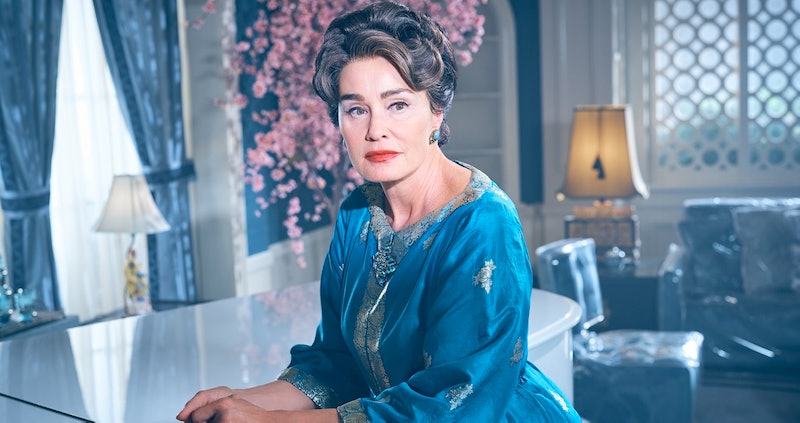 Feud examines Joan Crawford's life throughout the filming of Whatever Happened To Baby Jane?, taking an incisive look at her struggle to find work in an industry that too often dismissed her, and the backstage rivalry with co-star Bette Davis that came from it. But that film was only a small slice of who Crawford was. She had an extensive, decorated career, and off-screen, she was a mother — a title that came with its own set of controversies. But where are Joan Crawford's kids now, anyway?

First, it should be noted that her relationship with her children was contentious and complex. As Charlotte Chandler writes in her biography of Crawford, Not the Girl Next Door, Crawford was unable to have kids, so she adopted five: a girl, Christina, in 1940; a boy, Christopher, in 1942, who was reclaimed by his birth mother soon after; a second boy, also named Christopher, in 1943; and twin girls, Catherine (Cathy) and Cynthia (Cindy), in 1947.

Following Crawford's death in 1977, Christina published a memoir entitled Mommie Dearest, in which she alleged Crawford was an alcoholic who had been emotionally and physically abusive. She portrayed her mother as a controlling, erratic matriarch who had been more concerned with being famous than raising a family, sparking a public and divisive back-and-forth amongst the Crawfords' relatives, friends, and peers. Christina's younger siblings, Cathy and Cindy, vehemently denied the claims, as did Crawford's first husband, Douglas Fairbanks Jr, according to Not the Girl Next Door. Cathy told Chandler that though she and Christina had grown up in the same house, they did not have the same home, as Christina had "her own reality."

Mommie Dearest was made into a movie in 1981, starring Faye Dunaway as Crawford. It's now considered a cult classic, but the brouhaha surrounding Crawford and her children has since subsided.

While her mother was still alive, Christina had started a career in acting, but she switched gears after Mommie Dearest and went on to publish four more books. According to the Lewinston Tribune, she suffered a near-fatal stroke in 1981 and, after a few years of physical therapy, moved to Idaho and started a bed and breakfast. At the time of Not the Girl Next Door's publication in 2008, she had been married and divorced three times. The following year, The Spokesman-Review reported she had been appointed to the Benewah County Commission. She lost her election bid the following year, and went on to found a non-profit, the Benewah Human Rights Coalition, in 2011. She released a documentary, Surviving Mommie Dearest, in 2012, again recounting her alleged abuse and the personal and professional triumphs that followed.

There's little record of the rest of the Crawford brood, as it seems they stayed largely outside the spotlight. According to Chandler's book, Christopher died in 2006 at the age of 62, and Cynthia died in October 2007 at the age of 60. Cathy spoke at length with Chandler for Not the Girl Next Door, but her whereabouts now appear to be unknown.

Controversy aside, it seems Crawford's children led relatively long, full lives. Regardless of any hardships incurred on either side of the aisle, they pushed through, and that's worth some credit.

More like this
Here’s Why Danny Masterson’s Hyde Isn’t In 'That '90s Show'
By Brad Witter
'Bling Empire: New York’ Star Tina Leung Has A Superhero Alter-Ego
By Alyssa Lapid
The OG Power Rangers Are Returning For A Spandex-Clad Special
By El Hunt
The Bachelor’s Christina Mandrell Comes From One Of Country Music’s Most Famous Families
By Brad Witter
Get Even More From Bustle — Sign Up For The Newsletter