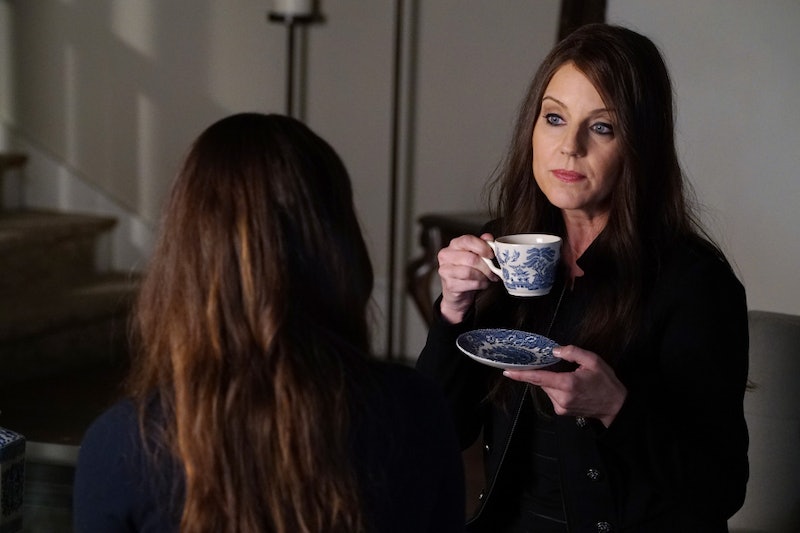 The Season 7A finale of Pretty Little Liars had Jenna flailing a gun all over the place and Mary Drake confessing that she was Spencer's mother, so imagine my un-surprise at the fact that come the Season 7B premiere, these two are nowhere to be found. Where are Jenna and Mary Drake on Pretty Little Liars? They're either hiding (because one of them is A.D.) or A.D. has disposed of them properly.

Honestly, every time I think someone is A.D., my opinion changes in the next scene. First, I thought it was Noel, and then he lost his head (quite literally). Then, I had eyes on Ezra (and still do), but his trail has grown cold. Now, I'm thinking it could be Mary Drake, and I'll tell you why — Mary showed up at the exactly perfect time when Spencer was shot in that abandoned house. Seems to me that it was the perfect opportunity to give Spencer some comfort in her pain and confess that she was Spencer's mother. In real life, Mary may not have had time to shoot Spencer, knock out Jenna, and then throw Jenna in the back of a van, but in Rosewood, she could have also ran the New York City marathon and been back in time. Mary is probably A.D., and Jenna her wanton accomplice.

But where are these two? If I know Mary, I'd like to think that she is just biding her time until the next assault. Jenna is just along for the ride. Hell, she's probably still in the back of the van! It's Mary's world, Rosewood — the Liars are just living in it.