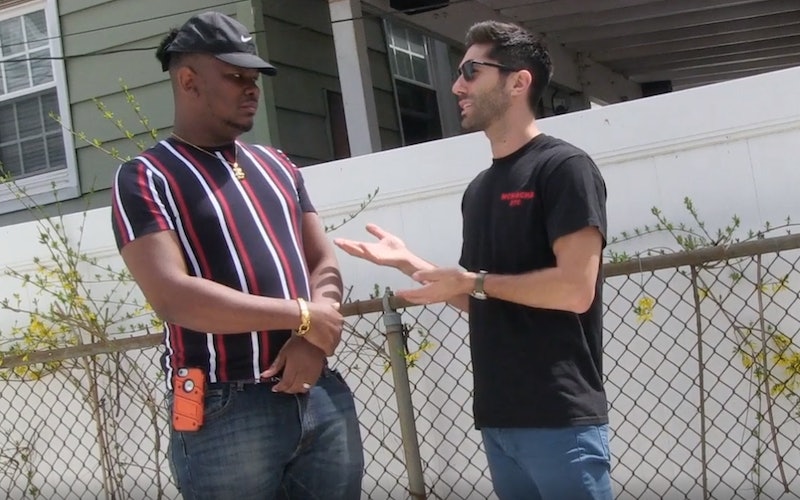 Nev and Orange Is the New Black's Kimiko Glenn brought Matt and Chance together on Catfish, hoping they would have a chance (get it?) of developing a relationship. The pair had been chatting for a few years after consoling one another over the loss of a mutual friend. The heart emojis never stopped coming, and Matt caught feelings. He assumed Chance felt the same way, but it turns out he was misinterpreting their relationship the whole time.

Matt is from Atlanta and Chance from New York. However, Chance visited Atlanta often and always told Matt when he was in town. Whenever Matt would ask to meet, something always came up. But Chance continued to keep the conversations going. They even spoke on the phone at least once a day. Nev and Kimiko read flirty text exchanges and agreed that Chance seemed romantically interested, but when he got wind that Catfish was in town, he blocked Matt from all social media and halted communication. In an effort to get in touch with him, the crew reached out to a friend of Chance's in Atlanta.

They visited her at work to get more details, and she seemed skeptical. She didn't understand why Matt wanted to talk to Chance and then admitted to being his girlfriend — a relationship Chance had never mentioned to Matt. Confused, Matt said he meant no disrespect, but wanted to understand why he remained in extended contact with Chance. Not to mention that he was dreaming about starting a life with him.

After the girlfriend got involved, Chance agreed to meet, and the trio flew to his house in New York. He opened the door to reveal that he was not, in fact, a catfish, but the exact person he claimed to be. So what was the big deal? Why didn't he want to meet Matt? Chance immediately became defensive and denied any claims of flirtation. When Matt said he thought Chance was bisexual, Chance got angry and bitter. He said Matt "should've gotten the hint" that he wasn't interested.

It was all a big misunderstanding, and despite Chance's near-blow up (in which he ripped off Matt's glued-on hair piece), Matt remained calm. He just wanted to understand why Chance had kept up their relationship, and Nev called Chance out for being hostile. Chance had just lost his father a few weeks prior, and admitted to being unstable because of that. He later apologized to Matt for being aggressive and they both agreed to move on.

When his blurred out Instagram username appeared on the screen, Chance had over a thousand followers. Now, his profile isn't easy to find. His girlfriend Randa's profile — the same one that was on Catfish — is still up and running. But any trace of Chance is nowhere to be found. It's unclear whether or not they're still together.

Chance could've just changed his username or set his account to private to avoid hate toward his attitude on the show. After all, it wasn't exactly his best moment. When Catfish tried to follow up two months after filming, they couldn't get in touch with him. Matt, however, spoke to Nev and Kimiko and said he's moved on, and that he'd been on a few dates with a girl he liked. As far as social media goes, he could be laying under the radar in an effort to put this experience in the past. After being led on like that, who could really blame him?

More like this
Brittany Snow Files For Divorce From Tyler Stanaland After 'Selling The OC' Drama
By Grace Wehniainen and Radhika Menon
Molly-Mae & Tommy Fury Revealed Their Baby Girl's "Really Unusual" Name
By Sophie McEvoy and Sam Ramsden
Here's Everyone Who Will Be Competing In 'Survivor' Season 44
By Brad Witter
Zach Addressed His "Boring Bachelor Energy" After His Group Date With Latto
By Grace Wehniainen
Get Even More From Bustle — Sign Up For The Newsletter
From hair trends to relationship advice, our daily newsletter has everything you need to sound like a person who’s on TikTok, even if you aren’t.