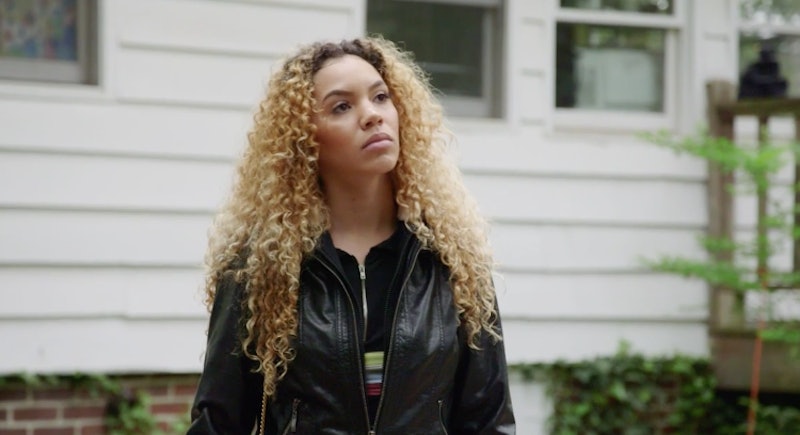 On this week's episode of Catfish, Taylor and Christian's relationship jumped quickly from a romance story to a thriller. Taylor is a 26-year-old day trader who moved to Los Angeles after growing up in Northern Ohio. She admitted to Nev and guest co-host Tallulah Willis that the L.A. dating scene just wasn't working for her, so when a guy who supposedly went to her high school slid into her DMs, her interest was piqued.

His name was Christian, and he claimed to know Taylor, which seemingly checked out: he knew which high school she'd graduated from, and which school she transferred from. Taylor couldn't remember his face, but she just assumed they hadn't run in the same circles. Then, the typical Catfish alarms sounded: the only form of social media he had was Facebook, he would never video chat, and one day, his Facebook was suddenly "hacked" and deactivated. When Taylor was retelling this story, she wasn't as noticeably distressed as previous guests on the show. She was actually strangely chill — "too shiny," as Nev put it. Nev sniffed out the lies before they even began to surface.

They soon found that one of Christian's phone numbers was registered to Taylor's best friend Jerrika, who lived in Atlanta. Obviously, Nev confronted her about it, and she pretended not to understand the connection. Nev then asked her to text Jerrika and looked over at her phone to find her number saved as the exact number they had retrieved from their search earlier that day. Talk about (cat)fishy.

Still, Taylor pretended to be oblivious, refusing to believe her best friend could possibly be involved. It was around that time that Nev received a text message that read: "You're getting played. CALL ME BEFORE YOU GO ANYWHERE." The person behind that number was Jade, who told him that the man they were looking for lived in Atlanta. With no other way to get answers, they hopped on a plane.

Nev, Tallulah, and a very quiet Taylor met Jade at an address she gave them in Atlanta. She was joined by two others, Hailey and Austin. Out of the blue, all three of them admitted to playing a joke on Taylor and apologized for taking it too far. Hailey went to high school with Taylor in Ohio, which is how they got specific details about her life.

Still, Nev didn't buy it. He knew Jerrika, who wasn't present, had to be involved somehow because of her phone number. And upon taking a break, a producer explained that she contacted the show and refused to come on because she no longer wanted to go along with "Taylor's plan."

You could cut the awkward, frustrated tension with a knife. But once they were inside, Nev, in his best dad voice, tried to calmly call everyone out on their bullsh*t. Taylor didn't budge until finally, the others threw her under the bus. They admitted that the whole story was made up by Taylor, who recruited them at the last minute to pose as catfish. She didn't seem apologetic at all, but later said that it was all just a stupid idea.

Earlier in the episode, Nev and Tallulah looked through Taylor's Instagram and noticed that she's been "leaning in," as they called it, to the influencer lifestyle. She obviously cares about her social media presence, and may have tried to use the show to be on TV and get more followers. Now, though, she may be reversing her efforts. After upsetting Nev and wasting his time, she likely knows that if she's found, she'll have to face Catfish fans' protective and defensive wrath.

The internet can be pretty unforgiving, and as of right now, it's not easy to find anyone from this episode. Neither Taylor or her friends have interacted with official Catfish accounts, and the episode didn't show any social media handles onscreen that would make them easy to track down — or give them the followers they may have been hoping for.

Unfortunately, this Catfish case didn't provide a satisfying love story or even a real breakup. Instead, it wasted a whole TV crew's time and only slightly entertained viewers. But it did at least remind everyone to check their priorities — internet fame isn't worth the dad glare and disappointment of Nev Schulman.

More like this
'RHOSLC’s Heather & Whitney Are Still On A “Friendship Break” After Season 3 Reunion
By Jake Viswanath
Everything To Know About A Potential 'RHODubai' Season 2
By Kadin Burnett and Brad Witter
Erika Jayne's Estranged Husband Tom Girardi Has Been Indicted On Fraud Charges
By Jake Viswanath
Airris From 'MAFS' Says He Doesn’t Regret Going To Decision Day With Jasmine
By Brad Witter
Get Even More From Bustle — Sign Up For The Newsletter
From hair trends to relationship advice, our daily newsletter has everything you need to sound like a person who’s on TikTok, even if you aren’t.