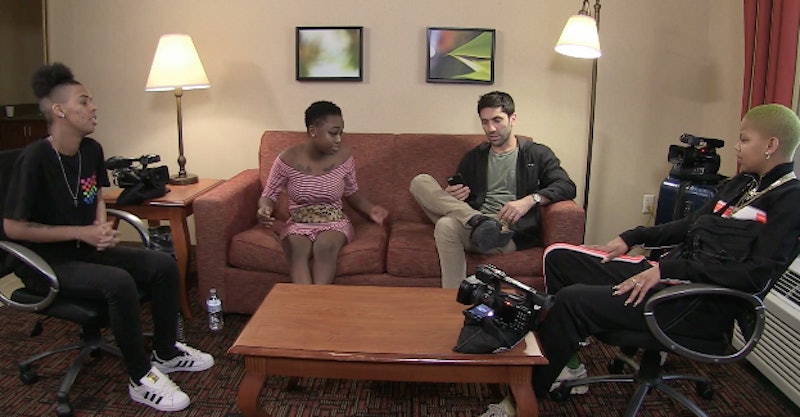 When there's a web of people tangled up in a Catfish story, there's always a good chance that most of them aren't real. That was the case for Nelly and Oceanna on Catfish, whose relationship got confusing very quickly. Oceanna contacted Nev and his guest co-host, Slick Woods, and told them about how she met her girlfriend, Nelly. She vented on Instagram live one day about wanting more than just a hookup with a girl, and Nelly offered to be that person. Oceanna was happy to give her a chance.

Naturally, after talking for a few months, Oceanna began to wonder when they could meet. They settled on meeting at a hookah bar in Oceanna's hometown and both of them decided to bring their best friends as social buffers (and for safety, just in case). Nelly's best friend was Raven, who Oceanna had met over FaceTime and knew was a legitimate person. Still, neither of them showed up to the date.

When Nev and Slick first heard this story, they were concerned that Raven and Nelly could be the same person, but Oceanna insisted their voices sounded different over the phone. After the failed date, Kira, Oceanna's ex-girlfriend who she had also met over FaceTime, texted her to let her know that she had been in contact with Nelly, too — that Nelly introduced her to a girl online named Kayla. Meanwhile, Oceanna began chatting with a new girl, Ciara, who just happened to mention that Kayla was her best friend.

That's when Nev and Slick became skeptical of Kira, assuming that she could be behind the all of the profiles in an effort to get close to Oceanna again after their breakup. In order to clear things up, they had no choice but to call Kira. She agreed to meet them and help them find Nelly, and when she showed up in person, they asked her, point-blank, if she was the catfish. She insisted that she wasn't, so they moved on by reaching out to Nelly directly and asking her to meet.

Reluctantly, Nelly gave Nev, Silk, Oceanna, and Kira an address, and the four of them drove over to finally uncover the truth. Behind the door was Nelly's "best friend" Raven, who had been Nelly all along. She admitted to having feelings for Oceanna, not knowing how to initiate a romance, and premeditating the Nelly profile for a year before finally following through and creating it.

Raven refused to admit to being behind the Ciara and Kayla profiles, even though all of the evidence pointed back to her, especially after she admitted to being Nelly. Nev even asked her to call Kayla while on camera. She dialed a number and let it ring on speakerphone, and a voicemail box touting the first name of Jennifer started to play before she quickly ended the call and said, "She's not answering."

Despite her unwillingness to admit the whole truth, Oceanna and Kira got the answers they needed and moved on with their lives. In their two month follow-up, Oceanna said that Raven admitted to being "the catfish queen" behind all of the other fake profiles.

Now, according to their Facebook profiles, all three of them are single. On May 29, Oceanna wrote a status that reads, "Starting to think relationships arnt [sic] for me." Instead, she's focusing on becoming a cosmetologist and pursuing music. She's still Facebook friends with both Kira and Raven, but there isn't much public interaction between them. Kira runs a private art page on Instagram, and her main account has been deleted. Raven's profile is set to private. Hopefully, her royal duties as catfish queen have come to an end.