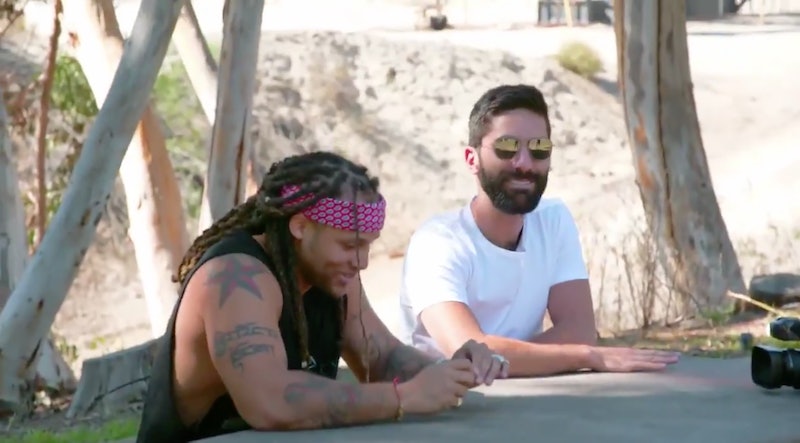 Another day, another person being lied to on MTV's Catfish. This week's episode featured Dallas, who was chatting for a while with a woman named Safari. Even though they were supposedly in the same city and super into each other, she kept avoiding meeting up with him and wouldn't video chat because her front-facing camera was broken. Yep, we've heard this story before, which means things predictably didn't end in anyone's favor. But where are Safari and Dallas from Catfish now, post-episode?

Well... they're definitely not together. As revealed in the episode, Safari wasn't actually who Dallas was talking to. Safari's friend William is the true culprit behind the Catfish, and as Dallas isn't interested in men, it didn't go all that well.

"Most of his fans are gay," William claimed of Dallas' modeling career. But Dallas retorted that wasn't really relevant, saying who follows him has "nothing to do" with what he likes. Nev thought William was shifting the blame away from himself for lying and almost acting like Dallas was asking for it, but William said he wasn't acting maliciously and that he didn't ask for money, and therefore didn't think he was doing any "harm" by lying. William also argued that the way Dallas poses and the photos he shares "target the gay community" and that he shouldn't make money off of those people if he's not actually gay.

Nev conceded that perhaps his social media presence might give the vibe of someone who may be into guys, but that still doesn't mean it's OK to lie and deceive someone. A straight-up conversation at the start about whether Dallas would be interested in William would have saved everyone a lot of trouble.

When Dallas, Nev, and co. eventually met Safari, she and William stuck with that argument. The two seem to think that just because Dallas has a large gay fanbase, it means he should be open to same-sex partners. But not everyone was having it. "I don't agree with you guys when it comes to [the idea that] because Dallas caters to homosexual fan base, it puts some of the responsibility [on him]," Nev said. His co-host, Tallulah, added that though she can understand the thought process behind their points, it's not their place to force a same-sex encounter onto Dallas by tricking him into thinking he's talking to a woman.

All in all, everyone seemed to agree to disagree about what went down. William apologized, and Dallas said he's not one to hold a grudge. At the two-month check-in, they appeared to still feel that way, and said they haven't talked since filming wrapped.

Dallas' Instagram feed (which is super NSFW!) doesn't show any signs of William, Safari, or any other romantic partner, nor does his Twitter. William's last name was never revealed, and he couldn't be easily detected on social media when searched in relation to Catfish. Safari, meanwhile, is still very active on Instagram (and also has a very NSFW feed), but there's no sign of Dallas there, either, so it's safe to assume they all went their separate ways. Hopefully everyone's moved on to more honest relationships.