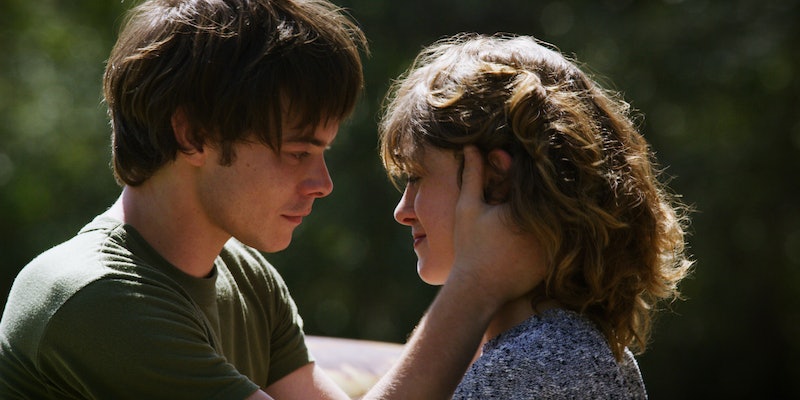 Spoilers ahead for Stranger Things 3. When you get attacked by an interdimensional monster not once, not twice, but three times in your hometown, it's understandable that you might not want to stick around. Of course, that doesn't make the Byers moving away from Hawkins in Stranger Things 3 any less heartbreaking. But when you consider everything that Joyce and her children — now including the newly parent-less Eleven — have been through, you can't blame her for wanting a fresh start. It's just that we have no clue where this fresh start is taking place, or when (if??) we'll see them again.

Early on in Stranger Things 3, Hopper tells Joyce he knows that she's putting her house on the market and is planning to leave Hawkins. He spends the season trying to convince her to stay, and for a second —after the two finally agree to go on a real date — it seems like there's a glimmer of hope. But three months after Hopper seemingly dies during the explosion caused by re-closing the gate to the Upside Down, Joyce, Will, Jonathan, and Eleven pack up and head out of town. Ignoring the end credits scene, the last shot of Stranger Things 3 is Joyce shutting the door to her old home and saying goodbye to her life in Hawkins.

Where Eleven and the Byers are moving isn't revealed, but based on the grim faces of Mike, Nancy, Dustin, Lucas, and Max as they drive away, they're clearly not just going to the next town over. Plus, Mike has already begun planning visits for major holidays — letting El know he'll be at their new place for Thanksgiving and then inviting her and Will to come to his house for Christmas. Based on that, it seems like the Byers and Eleven are moving more than just a couple hours away.

Although the entire Upside Down universe has always been a part of Stranger Things, the show's world has continued to expand since Season 1. In Stranger Things 2, Eleven road-tripped to Chicago to meet Eight while Jonathan and Nancy went elsewhere in Illinois to speak with Murray Bauman in his bunker. But Stranger Things 3 really upped the ante by traveling to the far reaches of the Soviet Union. And with the Upside Down going global, it makes sense that we'd see even further beyond Hawkins, too.

But that won't get rid of the pit in your stomach you might have felt as you watched Joyce, El, Jonathan and Will drive away from their friends, especially since they'd all been through so much together. So while escaping the memories of Bob Newby, the Upside Down, and Hopper may seem like a good idea, it feels like all of the Stranger Things characters will suffer from this separation — particularly El, who is vulnerable after losing her powers and the only father figure she'd ever known.

Still, showrunners the Duffer brothers had previously hinted that a move away from Hawkins could happen. When discussing the future of the show with Vulture in 2017, Matt Duffer said, "We just have to keep adjusting the story. Though I don't know if we can justify something bad happening to them once a year." Ross Duffer added, "They're going to have to get the f*ck out of this town! It's ridiculous!"

So Joyce moving her family away could have been part of the Duffer brothers' plan all along. And while it still stings, it does widen their potential storytelling. Maybe El will meet the other numbered children who were experimented on. Maybe a trip to Kamchatka, Russia, will be in order to save Hopper (if he is, as the end credits scene suggests, still alive). Because no matter where they travel to, their shared trauma will bring Joyce, Jonathan, Will, and El back to the rest of the group someday.