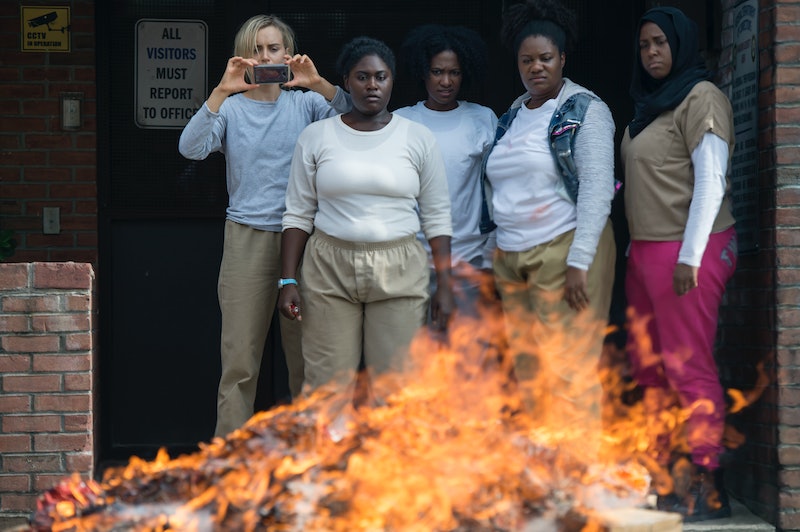 If you're the type of person that likes to say that locations are "just like another character" in stories, then you have to be prepared for those inanimate characters to suffer the same fate as human characters. There are SPOILERS for Orange is the New Black Season 5 ahead; don't read on unless you've seen Episode 13. Where will the Orange is the New Black inmates go after Season 5? Litchfield has been vacated, burnt, torn apart, and even a little bit exploded.

I don't think we're going back to Litchfield for at least another season. The damage is going to take a while to repair. There's no way that all of the inmates can fit at one maximum facility. They're going to be separated, at least for a little while. While it'll be interesting to see the new dynamics that form when Morello is no longer with Nicky, Flaca doesn't have Maritza, and all the other mix-ups in the aftermath of the riot, where exactly are they going to go?

Ten of the inmates were last seen at the pool. Two have escaped, and everyone else was loaded into buses to be temporarily (I hope) transported elsewhere. It's possible that everyone will be permanently transferred, in order to prevent another riot from the same group, but that would kind of end the show. Right? Maybe some of them will get flown to another MCC prison in another state. Maybe they'll take them to an abandoned summer camp and recreate Dirty Dancing. Maybe they're just going to sit in a van for all of Season 6. After all, Season 5 took place over only about 72 hours.

On the other hand, I can see the ladies of Litchfield being the ones made to refurbish the place themselves after the riot. Maybe they really will be right back where they started. The Season 5 finale ended with the fate of the prison itself up in the air. We won't know where everyone is headed until Orange is the New Black returns.

More like this
The Duffers Shared A Clever Update Of Their ‘Stranger Things’ Season 5 Plans
By Kadin Burnett and Sophie McEvoy
Here’s What 'Sister Wives’ Star Christine Brown Has Been Up To Since Leaving Kody
By Grace Wehniainen
Here’s When 'Love Is Blind: After The Altar' Was Filmed, Because It’s Hard To Keep Track
By Grace Wehniainen
'House of The Dragon' Episode 6 Will Take Place A Decade After Episode 5
By Kadin Burnett
Get Even More From Bustle — Sign Up For The Newsletter