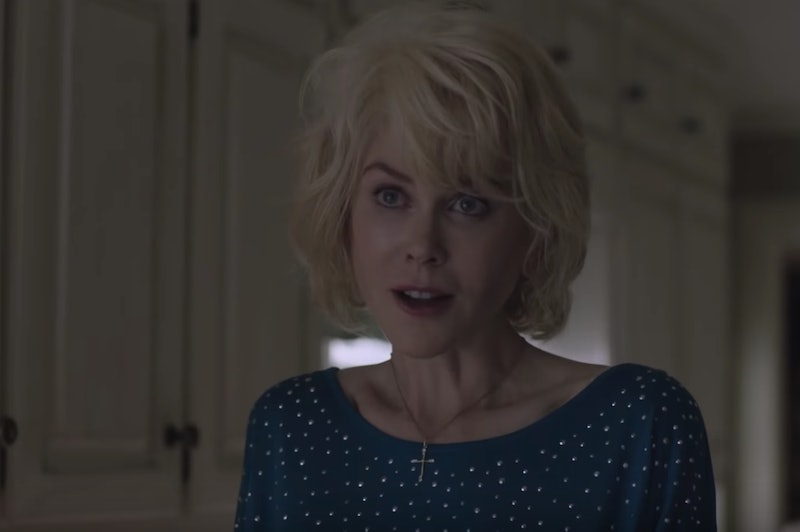 In Boy Erased, out Nov. 2, a 19-year-old is sent to a conversion therapy program after his mother and his Baptist pastor father learn that he's gay. The film is based on the 2016 memoir written by Garrard Conley, and it's an intimate look into the abusive and manipulative tactics employed at these facilities. For much of the film Jared (Lucas Hedges) and his parents are struggling in their relationship, but in 2018 the real parents from Boy Erased are still in contact with their son.

Not a lot has changed for Conley's parents, it seems, since Conley went to the Memphis conversion therapy program, called Love in Action, in 2004. Conley's father is still a Baptist preacher in Mountain Home, Arkansas, per The Guardian. However, the real parents who inspired the movie have remained thoroughly private since their son's book Boy Erased: A Memoir of Identity, Faith, and Family came out in 2016. "We still have disagreement on LGBT issues," Conley told the BBC this past June about his father. "He thinks [sexuality is] a choice. And he has a congregation who, if he came out in support of me, would leave his church. He doesn't preach against LGBT issues. I'd say he's moved on."

While having a father who can't outwardly support him sounds less than ideal, Conley maintains that doesn't want to harbor resentment towards his family. "Yes, my parents made a terrible mistake which could have cost me my life. But they didn't know what they were doing to me," he told the BBC.

In Boy Erased, Jared's mom, Nancy (Nicole Kidman), doesn't view her religion to be in as great of a conflict with her son's sexuality as Jared's dad, Marshall (Russell Crowe) does. And even after Conley's book came out, the author's real mom proved more willing to participate in the recounting of the family's experience with conversion therapy. In his BBC interview, Conley said that his mom read the book as soon as it came out, but that his dad "claims he hasn't read it, which [he doesn't] think is possible."

But even if Conley's dad didn't want to be involved in the memoir and then the film that explore this difficult moment in their lives, it's proven inevitable for him to have at least some interactions with the actors involved in Boy Erased. Conley told The Guardian that Crowe actually attended one of Conley's father's sermons — which came as a surprise to both the pastor and Conley. "I was told my dad paused in his sermon for about two minutes, before continuing," he said.

Kidman didn't necessarily have to travel to Arkansas to meet her real-life counterpart though, as Conley told Mic that his mom visited the film's set herself. "I was on set three different times — my mom was there, my aunt was there, my husband was there, we all have cameos," Conley said. And if you peek at Conley's Instagram, you'll see that his feed features sweet photos of the writer and his mom.

The relationship that Conley has with his parents sounds complicated, but their story has the ability to give hope to others in similar situations, especially now that it's hitting movie screens.