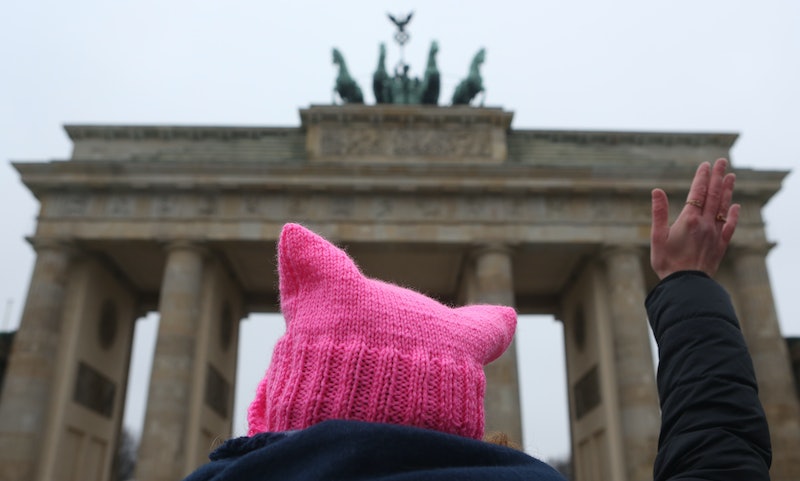 The first Women's March was on Jan. 21, 2017 to coincide with President Donald Trump's inauguration. This year's march stays true to the late January timeline, but will take place on Saturday, Jan. 19. "It's time to march again. And this time, we're coming back with an agenda," according to the Women's March website announcement. "On January 19, 2019, we’re going to flood the streets of Washington, D.C., and cities across the globe. The #WomensWave is coming, and we’re sweeping the world forward with us."

Like the previous marches, the Women's March's main event will be held in Washington, D.C. This map put together by the event organizers show "sister marches" for those unable to go to D.C. (Across the country, more than four million people attended the marches in 2017, according to The Washington Post, which amounts to about 1.6 percent of the population, according to the Post.)

In December 2018, the Jewish magazine Tablet published a piece alleging anti-Semitism and links to the Nation of Islam titled is " Is the Women’s March Melting Down?" (Leadership members said they "categorically condemn anti-Semitism," according to The New York Times.) As a result, the chapter for Washington State said it was shuttering in December 2018, while The Associated Press reported back in May that the Rhode Island chapter was splitting from the national organization after co-president Tamika Mallory refused to denounce Nation of Islam leader Louis Farrakhan after he gave a speech saying "powerful Jews are my enemy."

In response, the Women's March stood by Mallory and condemned anti-Semitism. "We will not tolerate anti-Semitism, racism, misogyny, homophobia, and transphobia and we condemn these expressions of hatred in all forms," the statement read. "Minister Farrakhan’s statements about Jewish, queer, and trans people are not aligned with the Women’s March Unity Principles, which were created by women of color leaders and are grounded in Kingian Nonviolence."

Shanna Wells — an organizer of the Rhode Island chapter — told The Associated Press that the national organization's refusal to listen to their concerns about the Farrakhan comments was a deal breaker.

"Across the nation, marchers said this is a problem for us. This is supposed to be an inclusive movement. We need you to decry anti-Semitism," Wells told The Associated Press in May. "They were defensive. They made out like it was our problem."

About 40 people voted to rename the group and move away from the national chapter, Wells said. "They refused to hear us saying that they needed to address their own anti-Semitism. This isn't the first time that the national organization had an issue with anti-Semitism," Wells told The Associated Press.

Women's March Chicago will also not host a January sister march, but the organizers cited costs and time commitments as their reasons for canceling, the Chicago Tribune reported. Instead, organizers will provide alternatives, but nothing has been announced yet. "There's no march, there’s no rally. We're going to provide ways for people to organize and take action in their local communities," Women's March Chicago board member Sara Kurensky told the Chicago Tribune.

If you're still interested in attending a march, the Washington, D.C. rally is still scheduled, and there are numerous marches registered on this map.