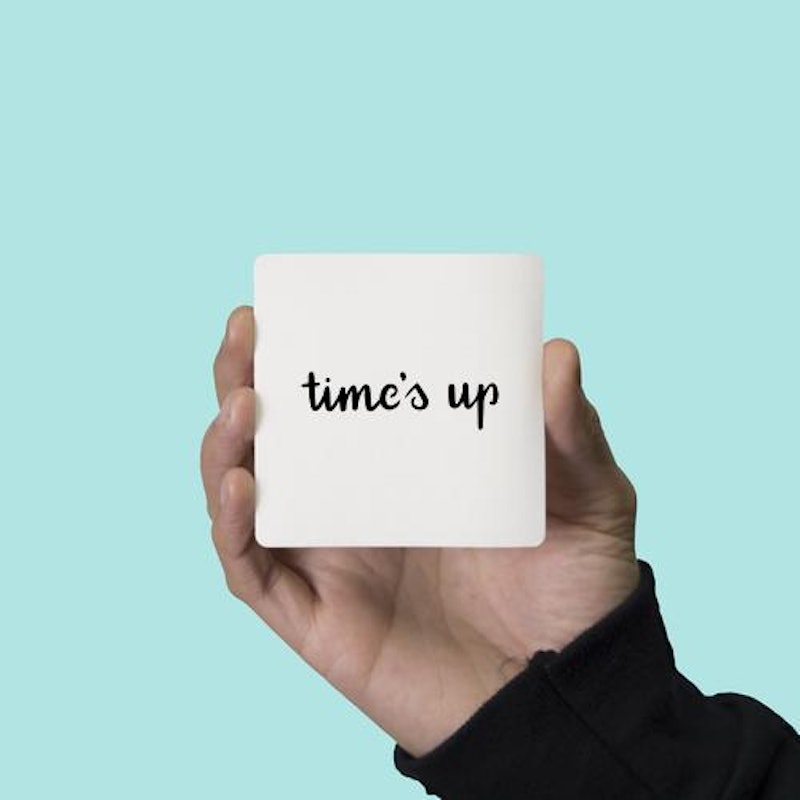 Everyone has their way of showing what they believe in. Some chose pins, others choose charitable tees, and the boldest of the bold pick tattoos. Emma Watson wore a "Times Up" tattoo to the Oscars, and now you can too. Except yours will be spelled right. InkBox created a semi-permanent "Time's Up" tattoo that gives all proceeds to the movement. Because wearing your cause as a sleeve is the coolest thing since graphic tees.

If you haven't heard of InkBox, listen up. The brand created the world's first-ever semi-permanent tattoo. It stays on for about three weeks, depending on where you apply it. The ink is put on at-home and is easy to use.

Now you can use the brand to help make a difference too. InkBox teamed up with the Time's Up movement to create a tattoo similar to Watson's Oscars accessory.

"People use InkBox to feel empowered and emboldened. About a month ago we released our 'me too' tattoo, with a portion of the proceeds going to Time’s Up. This really struck a chord with our customers, so we’re happy to release our 'Time’s Up' design, this time donating the entirety of the proceeds to an incredibly important cause," Braden Handley, president and co-founder of InkBox tells Bustle.

The tattoo is a little bit different from Watson's though. For one, the font is a little less dainty than the one seen on the red carpet. The other is that it's spelled correctly. The actress' tattoo read "Times Up," which was missing an apostrophe. Of course, the internet was quick to point out the misspelling.

It turns out that it was a mistake. Watson tweeted out, "Fake tattoo proofreading position available. Experience with apostrophes a must." She was poking fun at herself, but she also probably felt really great that it wasn't a real tattoo at that moment. After all, there's hope that this will be a temporary problem, so it only makes sense to get a temporary tattoo.

For those wondering, the tattoos was inspired by Watson's design though. "We loved seeing Emma Watson on the red carpet, showing that you don’t need to have a permanent tattoo to make a statement on self-expression," Handley says.

This isn't just a tattoo though — it's a way to make a difference. Not only will the design look great wherever you decide to put it, but all proceeds from the semi-permanent tattoo go to the Time's Up movement. Think of it as a way to give and get a little something to show your support at the same time. You can always donate directly to the movement on the website as well.

The brand will send you everything that you need to apply the tattoo too. All it takes is about twenty minutes to get the semi-permanent design.

"Semi-permanent tattoos are applied easily at home by holding a special cloth over an adhesive tattoo applicator for 15 minutes. The skin absorbs the formula through a cut-out of the design in the bottom of the applicator," Handley explains. "The formula reacts with your skin’s organic compounds to change its color. They last for a few weeks because the color binds to the skin on a molecular level, essentially becoming your skin. Semi-permanent tattoos fade away gradually as the skin exfoliates."

The tattoos are limited edition though. Just like the brand's "me too" semi-permanent ink design, which was sold in late 2017, it won't be around forever. You'll want to head to the website to grab one before they're gone. Because there's no cooler way to support the trend than inking on your body.

More like this
Meet Foreverist, The Skin Care Brand That Keeps Tattoos Looking Fresh
By Audrey Noble
Kendall Jenner's Cowboy Boot Tattoo Is The Cutest Micro-Ink
By Sophia Moore
Juvéderm Is Launching An FDA-Approved Jawline Filler
By Brittany Leitner
This Week's New Makeup Releases & More Beauty Headlines
By Olivia Rose Ferreiro and Erin Stovall
Get Even More From Bustle — Sign Up For The Newsletter