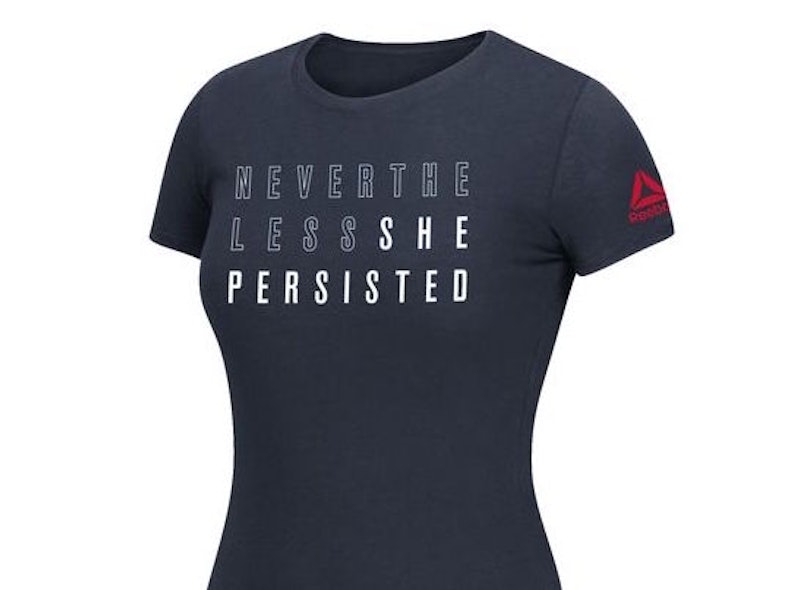 The words were barely out of Mitch McConnell's mouth before the "sames" poured out on social media: "Nevertheless, she persisted." Intended to explain the reasons for silencing Elizabeth Warren's reading of Coretta Scott King's letter on the Senate floor, it's become a rallying cry for many women. And in a tense political climate, the brands that are stepping up truly stand out. Where can you buy Reebok's "Nevertheless, She Persisted" shirt? It couldn't be easier.

The phrase has sprung up everywhere since it was first made public, with Instagrams, mugs, and every kind of item on Etsy bearing the slogan. According to Dan Mazei, Reebok’s Global Newsroom senior director, the Boston-based company is "committed as a brand to putting women first" (their #PerfectNever campaign proves that statement checks out). "We watched this week as our own state senator was 'silenced' by her critics for doing her job. As dismayed as we were, we were also reignited by the rallying cry of, "Nevertheless, She Persisted,'" Mazei wrote in an email.

"This is a unifying message that can inspire women everywhere from the Senate floor to the starting line of a marathon and everywhere in-between — all the places women have been obstructed from seeing through their ambitions. But, they persist." To that end, Reebok designed a shirt with the slogan. The company is donating all proceeds to the Women's March, "another cause that believes in persistence and pushing forward."

And while there's no end to items you can buy with the slogan — see: keychains, mugs, pins, and totes — there's something highly satisfying about seeing the tee labeled as part of Reebok's "WOMEN TRAINING" category.

According to the site, "Due to high demand this product is expected to ship 2/21/17." Place an order to think long haul, and in the meantime, there are many, many options to tide you over short-term.

Like the above, with all proceeds donated to the ACLU.

Every calligrapher and graphic designer in the land — this is your time to shine.