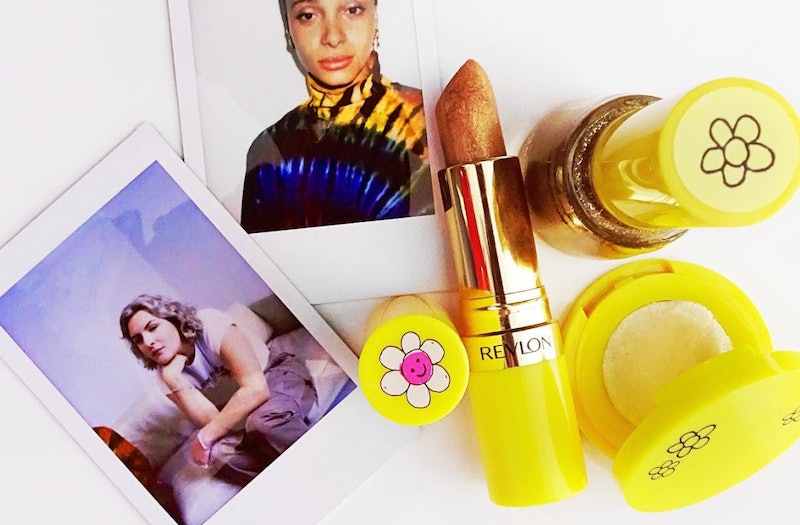 If you lust over the latest makeup trends but are too nervous to DIY a look at home, Adwoa Aboah is your new saviour. The model and activist's Gurls Talk platform has teamed up with Revlon to launch three makeup kits. Each one is designed to promote self-care and body positivity. Best of all, each product is super easy to apply. So where can you buy Revlon x Gurls Talk?

Scarlett Curtis, co-founder of activist group The Pink Protest, represents the Every Feeling kit which uses the colour purple to focus on positive mental health. Then there's the Celebrate Yourself kit: a golden set aimed at celebrating feminine health. Tasha Jane Bishop — the founder of The Pants Project — is the advocate for that one. Finally, there's a glittery pink set called Love Yourself. If you hadn't yet guessed, it's all about the art of self-care and is promoted by Mofe Sey, a central figure in the Gurls Talk community.

A series of short films has also been released. In them, Aboah can be seen discussing the power of makeup with Curtis, Bishop, and Sey. They talk about how the kits are ideal for people who struggle to apply makeup (guilty) with Aboah summing up the entire concept as "carefree".

As Love magazine reports, Aboah started Gurls Talk a year ago after struggling with mental health and addiction issues. The website is a space for girls and women to speak openly about the topics that are still seen as taboo in modern society. Aboah has also been holding Gurls Talk events around the world.

"For the Gurls Talk x Revlon collaboration, we used members of the Gurls Talk community for our campaign and chose a diverse cast to represent different skin tones and backgrounds," she told the magazine. "It’s important for people to see themselves reflected in the media and feel like they have a voice."

She also stressed the importance of self-care, adding: "Trying to balance work life and social life also makes it feel impossible to take time for yourself. I think ‘self-care’ sometimes even seems like another task in itself. Taking a bath, changing your clothes even if you aren’t leaving the house, eating, going for a walk/run, etc. are all stepping stones to help keep you active and calm. Those little steps are so important in making depression/anxiety feel more conquerable."

Aboah was named a Revlon ambassador in January 2018 along with the likes of Ashley Graham and Gal Gadot, reports Vogue. As well as collaborating with the global beauty brand, the model also appears in Revlon's new I Can So I Did campaign to promote its PhotoReady Candid Foundation which comes in 31 shades.

It seems like the beauty industry is finally taking a turn for the better. All hail Aboah.