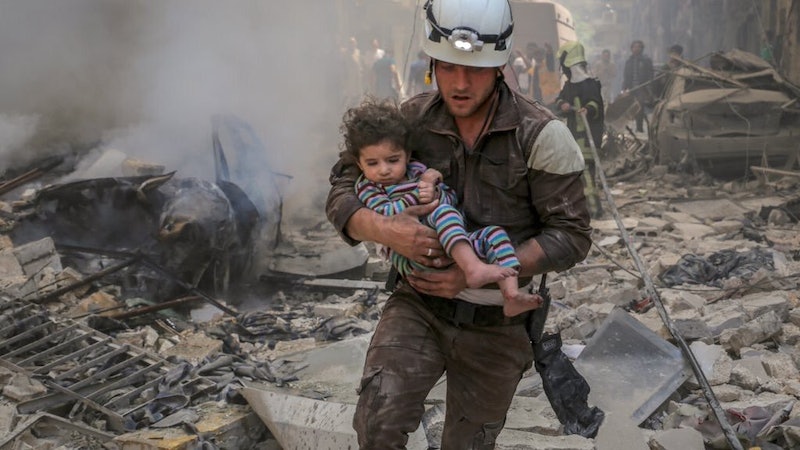 One of the most powerful moments at the 2017 Oscars was the presenting of the Best Documentary Short Subject Award, as the honor went to The White Helmets, a film that documents the work of the Syrian Civil Defense, whose volunteer rescue workers, known as "White Helmets," risk their lives to save those injured by ongoing warfare in Syria. The documentary is gripping and vital, deserving as wide of an audience as possible. While it's pretty well-known that finding a way to watch the Oscar nominated short films in all categories, but especially the documentary category, can be challenging, thankfully, you can stream The White Helmets without too much difficulty.

The path to streaming The White Helmets is, luckily for viewers, a very smooth and simple one. The documentary is a Netflix Original, which means that it made some history on Oscar Sunday by becoming the first Netflix film to win an Academy Award. That's a pretty big deal for the streaming service, which has been gaining credibility with its original programming for a few years now and in 2014 became the first major streaming service to receive an Oscar nomination, for the documentary The Square.

So, since The White Helmets is a Netflix Original, that means that, yes, if you have a Netflix account then you can watch it on the site any time you like. Being able to watch an Oscar-winning documentary short on your own device, legally? For those of us familiar with the struggle of trying to hunt down critically acclaimed and award-winning movies, this is a pretty exciting development. Accessibility has often been a challenge for films that aren't released by big Hollywood studios, and I'm glad that The White Helmets is able to be seen by so many people.

Of course, there are people out there who prefer to watch films in the theater. You might be one of them, or you might be someone who doesn't have a Netflix account or way to access Netflix in your daily life. There is still another old-fashioned way to see The White Helmets, at least for now, and that's in the theater. ShortsHD works with the Oscars to show all of the Oscar-nominated short films (in all three categories: animated, live action, and documentary) in theaters across the country throughout Oscar season. You can go to their website to find a search feature that allows you to specifically search the "documentary" category and shows which theaters near you will be playing them. So, you can not only catch The White Helmets, but also some of the other nominees.

Now, I don't know for how much longer these theaters will be offering the Oscar short film nominees — a brief search revealed a number of theaters around the country that are showing the films have them in their programming at least until next week — so you might want to jump on it, but even when The White Helmets is out of theaters, you'll always be able to watch it directly on Netflix.