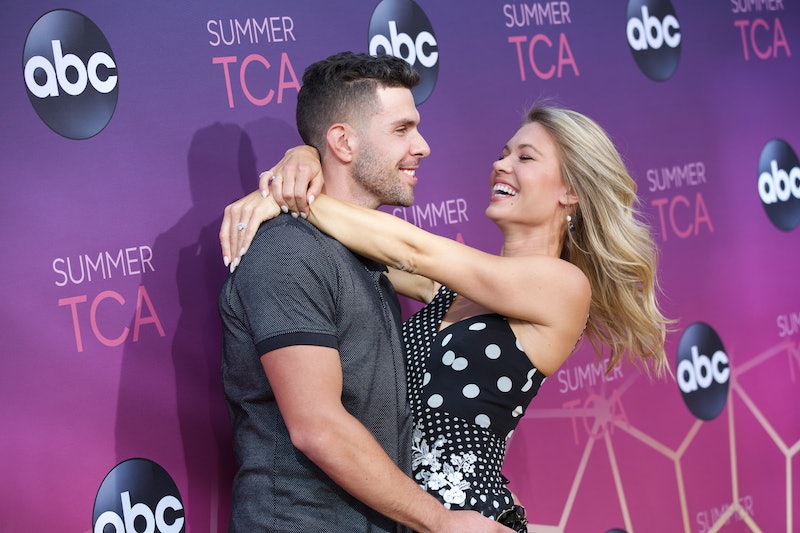 While Bachelor Nation finally gets to watch Chris and Krystal's wedding tonight, Aug. 27, on Bachelor in Paradise, the happy couple have actually been married for over two months, according to People. Their nuptials took place on June 16 — while the reality show was still filming in Mexico. As a result, fans may be wondering where Chris and Krystal live, now that they've officially settled down.

The couple moved in together last October, per the same People article, when they began cohabiting in San Diego. "It was fast," Chris told the magazine. "But in that environment, it's equivalent to months of dating. We accomplished a lot more in a shorter amount of time." And the happy couple are still in the Golden State, soaking in rays, since Chris and Krystal both posted this photo to their Instagrams a week ago, which he geotagged with San Diego. "Throw our first dinner party as a married couple? Check!" Krystal wrote.

But while their current apartment is quite swanky and spacious, they started out in much more snug quarters. In the couple's webseries, Glitter & the Goose, Chris described how he moved from Orlando to California, where they stayed in Krystal's "300-square-foot bungalow." But after a few months, he says that they upgraded to something bigger. "Coming here a few months ago, I honestly did not know what a bungalow was, and 300-square-feet later, it really opened my eyes to understand that a bungalow is moreso like a little nest — a tiny little nest for a silly goose," Chris said.

The vlog features the couple moving out of Krystal's beloved bungalow. "You know, the crazy thing is that the day I moved in was the day my friends submitted me for The Bachelor," she told Chris, later saying the exact date was Sept. 14, 2016. Krystal was clearly feeling a little nostalgic about leaving her little apartment, which she referred to as her "magical place" in the video.

However, they upgraded to something a lot bigger, which was also located in San Diego. And while the moving process looked picturesque in their vlog, Krystal said on Instagram that it actually took them seven days. "Can't wait to start building our life together @chrisrandone and make our own memories," she wrote back in November. "While the bungalow was an incredible time to see what living together in 'real life' was like... the 300 square feet will not be missed!!"

And while the square footage is certainly a welcome change, Krystal told Chris in their vlog, "I never...envisioned myself living in an apartment again having dogs." The former Bachelor contestant went on to explain what a pain it is to take her pooches outside to go to the bathroom in the middle of the night, which now involves going down the elevator. Fortunately, she was able to convince him to take one for the team once in awhile and bring them downstairs in her place.

And in a later video, they gave audiences a tour of their new space, which included an office for Krystal and plenty of space in their walk-in closet for her workout clothes.

But when they're not kicking back in their new apartment, they've been traveling to New York, Portland, and Las Vegas, among others, while Krystal's also gone back to visit her hometown of Missoula, Montana. And before their destination wedding in Mexico, they had an engagement party back in May at a San Diego Venue called Ethereal Gardens.

But most of the time, it seems like Krystal and Chris are hanging out in their San Diego apartment with their two dogs, shooting their vlog, and living happily ever after.

More like this
Laura Tott From 'First Dates' Married Her Long-Term Mystery Boyfriend
By Darshita Goyal
Where Is Clayton Echard Now? The Former 'Bachelor' Star Is Dating Susie Evans
By Kadin Burnett
Indian Matchmaking’s Viral Revealed A Major Clue About Her Relationship With Aashay
By Radhika Menon
'Indian Matchmaking's Pradhyuman & Ashima Have Made No Secret Of Their Marital Status
By Brad Witter
Get Even More From Bustle — Sign Up For The Newsletter