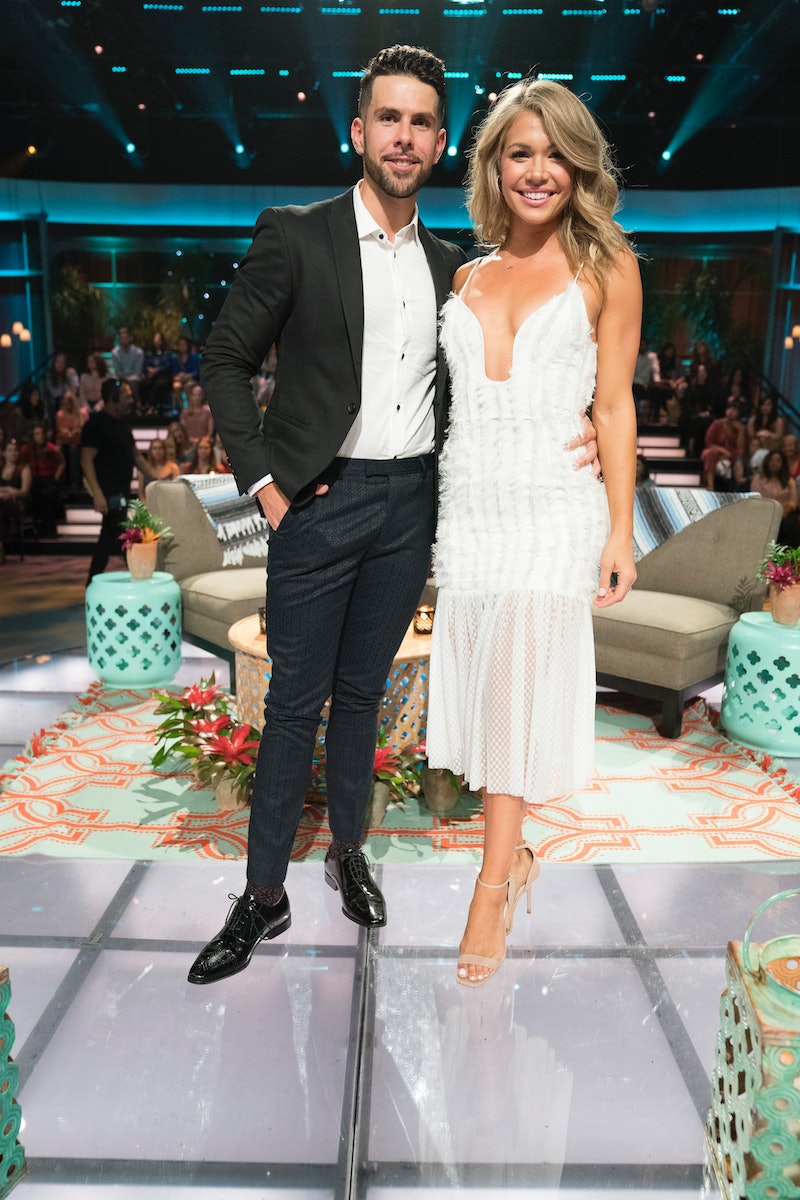 After experiencing the highs and lows of finding love on reality TV, Krystal and Chris from Bachelor in Paradise started a vlog series to chronicle their continuing love story. The vlog is appropriately named "Glitter & The Goose" — Goose is a nickname Chris made famous on the show. The couple met for the first time on Season 5 of BiP and found themselves engaged after the season's finale. Now, they've been engaged for eight months, and they just moved in together in Krystal's hometown of San Diego. Their vlog series documents their daily life after leaving the romantic beaches of Mexico, and it's a major treat for Bachelor Nation fans who want to keep up with the couple.

In the series' trailer, the couple talked a little bit about why they decided to start vlogging. "We saw the love and support from everyone out there," Chris said. "So we thought, why not continue to share the journey and story," Krystal added. "We don't wanna just be remembered by who we were in Bachelor in Paradise," Chris continued. "We want them to see the real, the raw, the good and the bad. But more importantly, to just share our love story with you guys. Because without you guys, we wouldn't be here where we are right now."

The series' fifth episode was published on Feb. 14, and they upload new videos weekly. It's unclear how many episodes they're shooting for, but they do label the videos with "Season 1," so they may be anticipating future seasons already.

The first episode of the series follows the pair as they pack and move out of Krystal's 300 square foot bungalow in San Diego. After leaving BiP, Chris moved in with her for two months to test their relationship for real. In the video, they share what they learned about each other during their two months spent in close quarters, and it's honestly so cute.

Krystal was emotional about moving out of the bungalow, because it saw her through a lot of life changes. The day she moved into the bungalow was the same day her best friend nominated her to be on The Bachelor in 2016. It's also the same place she received the phone call to appear on the show.

"It's just crazy moving out of the bungalow because I'm leaving with my fiancé who I met because of The Bachelor," she said in a vlog. They moved to a bigger apartment in San Diego and started unpacking by slow dancing in their kitchen. If you're a sucker for romance, you won't be able to get enough of this couple's love story.

In the second episode, Krystal surprised Chris with a birthday trip to Vegas where his closest friends met up with them to celebrate. There, they also held an engagement photo shoot and Chris was beaming with excitement, saying it "made everything more real." He said he couldn't wait to call Krystal his wife. Meanwhile, the couple has yet to announce an official wedding date, but have spoken about the possibility of it being televised.

On the channel, they have also shared an MTV Cribs-style apartment tour, an energizing power bowl oatmeal recipe, and lots of walks with their two dogs after waking up at 5:30 a.m. every day. They also gave viewers a peek into their work day (Krystal must complete her most important tasks by noon). Krystal runs a personal fitness business, and Chris helps her with its marketing while running business ventures of his own.

Although it might seem like it, it's not all rainbows and butterflies in Glitter and Goose's household. In Episode 4, they returned home to find flooding in their apartment. But they managed to remain positive and distracted themselves by redecorating. In Episode 5, Chris lost a bet that required Krystal to take him to get his back waxed — which was as unappealing as it sounds, but pretty funny.

More episodes of "The Glitter & The Goose" are expected, and there's no way of anticipating what adventures they'll document next. Regardless, their channel might just be every Bachelor fan's dream because it's an extension of their exciting time in the mansion and on the beach.