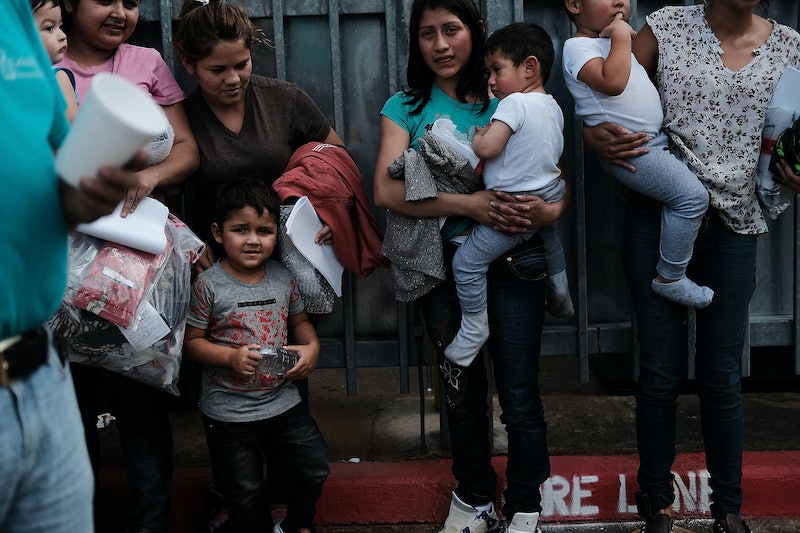 In the past month, public fury over President Trump's zero tolerance border policy has reached a crescendo, and that anger over separated mothers and children is quantifiable: a Texas non-profit immigrant legal aid group raised record-setting funds to help detained migrants. The Refugee and Immigrant Center for Education and Legal Services (RAICES) has raised $20 million, and on Tuesday, the non-profit announced that it's ready to spend. Currently, RAICES is using its money to help detained migrant mothers in a huge way, according to Mic.

RAICES offers free and low-cost legal aid to immigrant and refugee families, and the group said it would be using the $20 million to pay off bail bonds for more than 2,000 mothers currently detained by the Trump administration.

"We call for all separated families to be reunited, and we demand that the administration accept our $20 million bond check to enable the speedy release of the mothers of the approximate 2500 children who have been separated, so these families can be reunified," RAICES wrote on their website on Tuesday.

According to Mic, the group said in a statement on Tuesday it had sent representatives to Washington, D.C., with the funds and was ready to write a check to free detained mothers.

“We’re in D.C. with a $20m check to pay bail bonds for over 2,000 mothers still detained,” the statement read, according to Mic. “More than 1 million people donated over $20m and their message is clear: reunite the families. Trump says he’s a deal-maker, here’s his chance to cut a deal.”

It's unclear how RAICES will post bail once the group is in D.C. According to Mic, the non-profit did not give specifics about the mothers it sought to help. A spokesperson for RAICES could not immediately be reached for comment, per Mic.

On Twitter, the group appealed directly to the president, asking him to "end this now."

During RAICE's press conference in Washington, D.C. on Tuesday, a number of elected officials and civil rights activists spoke in response to the non-profit's bail bond efforts, though it wasn't without incident at first. RAICES tweeted that the Secret Service had kicked the group off the road in front of the White House without giving them a reason. After moving to another location, the group was told to leave again, according to the tweet.

The non-profit was able to finally hold their press conference on Capitol Hill, where RAICES activists talked about why they made detained mothers a priority.

"Millions of people across the world have donated over $20 million to RAICES, and their message is clear: there's zero tolerance for the separation of families. Everyone should be treated with dignity and respect," said Jennifer K. Falcon, the communications director for RAICES. "The process is expensive and complicated with bonds running an average of $10,000. This creates hardship on low-income asylum seekers already trying to navigate through legal roadblocks."

"The American people are outraged that we have an administration whose cruelty has stooped to the level of literally tearing little children out of the arms of their mothers and their fathers. This is clearly not what this country is about," said Sanders, who was a presidential candidate in the 2016 election. "The damage done to these children will find themselves in a world where they can't speak the language, find themselves hundreds and hundreds of miles away from their moms and their dads will be incalculable, not to mention the pain felt by the mothers and fathers who feel that they may never see their kids again."

While RAICES has the money for bail, it's unclear whether these detained mothers are even being offered a chance to post it. A Reuters investigation found that under the Trump administration, federal officials are increasingly denying bond to detained immigrants. But if successful, RAICES' attempt to post bond could go a long way in making sure detained mothers are released into the care of someone they know while their cases are adjudicated, making the chances of reuniting with their children more likely.