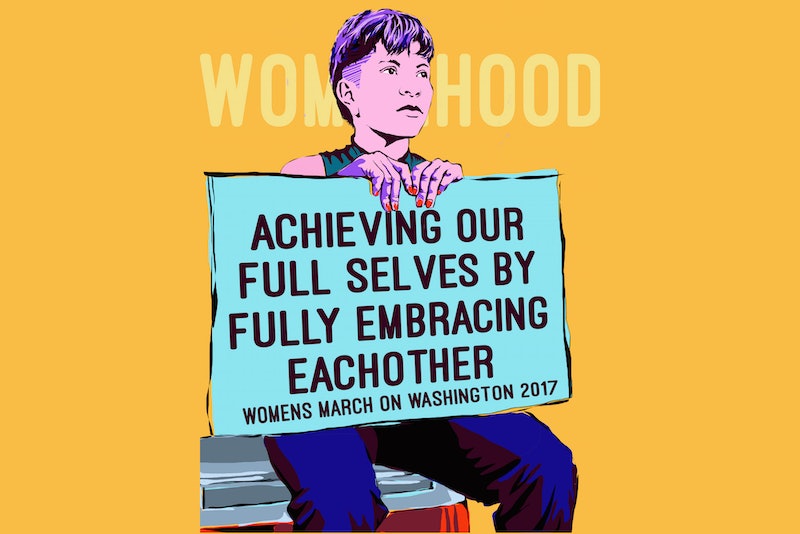 There's just one week to go until Inauguration Day, and for hundreds of thousands of dissatisfied people across the country, that means that there's just bit over a week until they make their way to Washington, D.C., to protest President-elect Trump's administration. The protest's organizers have released some information regarding location, time, transportation, accessibility, and other matters, but the Women's March on Washington ending point hasn't been announced.

The march will take place on Jan. 21, the day after Donald Trump takes the presidential oath, at 10 a.m. Participants are instructed to meet at the intersection of Independence Avenue and Third Street SW, in front of the Capitol Building. As to the rest, the protest's official FAQ page says, "Stay tuned to our website for more information about the route as we get closer to the march."

The Women's March organizers have faced multiple issues in trying to obtain permits for the day. While D.C. police granted them permits in mid-December to march in certain areas, Janaye Ingram, the Women's March head of logistics, told the Washington Post that there was still a "pending application for a permit for various Park Service locations." With roughly 20 groups having applied for permits in the same areas for inauguration-related demonstrations, bureaucratic difficulties have most likely slowed the process of establishing an official route.

Whether the absence of a confirmed ending point is a result of complications behind the scenes or simply a preference on the part of the organizers is unknown.

According to the video put out by the event's organizers, the full march will span "about 1.5 miles" and will last seven hours, from 10 a.m. to 5 p.m. Nearly 200,000 people on Facebook have RSVP'd as "going" to the march, and it is anticipated to be one of the largest protests in United States history.

In the spirit of democracy and honoring the champions of human rights, dignity, and justice who have come before us, we join in diversity to show our presence in numbers too great to ignore. The Women’s March on Washington will send a bold message to our new government on their first day in office, and to the world that women's rights are human rights. We stand together, recognizing that defending the most marginalized among us is defending all of us.

Such a mission statement makes it unsurprising that the group's policy platform is highly progressive, demanding the protection of women's reproductive rights, a stop to mass deportation of immigrants, equal pay for equal work, and more.

If you'd like to be one of the thousands marching in Washington next Sunday, your first step is to register.