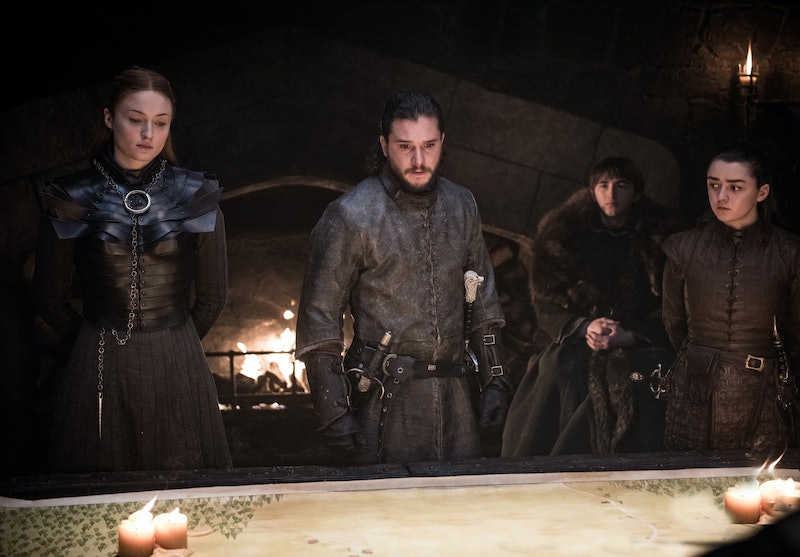 Arya once asked, "Essos is East. Westeros is West, but what's West of Westeros?" So this assassin has decided to parlay her killing career into that of an explorer. And if Game of Thrones is looking for another spinoff, a series following Arya the Adventurer is pretty much already writing itself.

Arya was there for all of the Battle of King's Landing and knew firsthand how Daenerys couldn't be trusted after burning the city down. Her cousin Jon did what needed to be done by killing the Dragon Queen, but Arya — who is prone to not staying in one place — stayed in Westeros until a new order was established. Tyrion suggested Bran become the new king, and Sansa agreed only if the North could remain free. Jon was exiled to the Night's Watch for killing the queen, and with her siblings firmly established, Arya decided to follow her adventurous spirit and go West.

As Arya mentioned back in Season 6 to Lady Crane, no one knows what's West of Westeros. So she created her own Stark fleet (complete with a direwolf figurehead at the bow of the ship) and went off to explore a new territory. Arya probably could have done it all on her own just as she always has, but knowing she has sailors and ships going to these unknown lands helps make this journey more official and safe. And while so many explorers in our own, real history have been terribly problematic, it's pretty awesome to know that an ambassador like Arya Stark is going out to discover new lands. Because unlike Daenerys, Arya is no conquerer.

The Game of Thrones show hasn't really shared too much about "West of Westeros" except for Arya's interest in it. But there's more information in George R. R. Martin's book. Like Daenerys crossed the Narrow Sea, Arya will have to cross the Sunset Sea. According to the Wiki of Ice and Fire, the Sunset Sea contains animals like swordfish, seals, and whales — which probably won't be too impressive to Arya after seeing dragons fly, but still. And no one has ever successfully crossed this sea, according to Martin. Somewhat fittingly, the last person to try was another King Bran Stark — Brandon the Shipwright from the North. But he was never heard of again.

But if anyone can survive a journey to where the maps stop, it is Arya Stark, the killer of the Night King. And really, there's no better ending that the hero of the Battle of Winterfell and all of Game of Thrones deserves.

More like this
This Episode 6 Moment Foreshadows Viserys' Fate On 'House Of The Dragon'
By Grace Wehniainen
'House of The Dragon' Episode 6 Will Take Place A Decade After Episode 5
By Kadin Burnett
Alicent's Green Dress In 'House Of The Dragon' May Be An Act Of War
By Kadin Burnett
Nicola Coughlan Shared A Lady Whistledown Excerpt From ‘Bridgerton’ Season 3
By Grace Wehniainen, Alyssa Lapid and Sam Ramsden
Get Even More From Bustle — Sign Up For The Newsletter