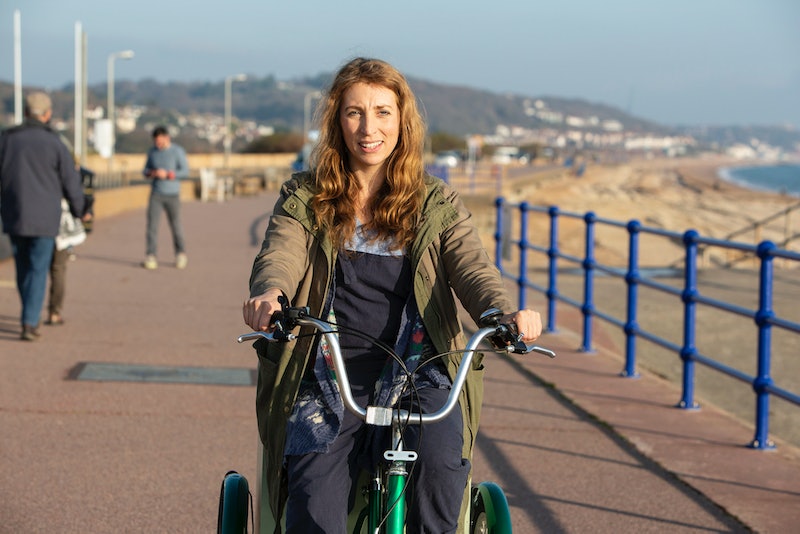 If you're missing Fleabag, you're in for a real treat. BBC Three's brand new comedy drama, Back to Life, has taken Phoebe Waller-Bridge's TV spot — both literally and figuratively. But although both series were created by women (Daisy Haggard is behind the newest release), they are completely different. Take the settings, for example. Fleabag is London-based. But Haggard's post-crime show has gone for an alternative British look. So where is Back to Life filmed?

On screen, the six-part series is located in the coastal town of Hythe. And according to the Kent Film Office, the filming locations largely stayed true to the script. Hythe's seafront features in the show along with the Britannia Pub Inn in Dungeness, Lade car park in Lydd-on-Sea, and an unnamed place in Abbot's Cliff. However, as Haggard (who also plays Miri) told the I Talk Telly blog: "We always wanted that feel of an American indie film but in a British comedy setting." For some viewers, this may remind them of Sex Education, a Netflix show set in a British village, but with a distinctly American tinge to it.

The storyline centres on Miri: a woman in her forties who has just returned to her parents' house after serving an 18-year prison sentence. Her crime is unknown to viewers at first. But the length of the sentence and the reaction from local residents suggests it was a serious one. In an interview with the Radio Times, Haggard noted that, thankfully, "you don't have to wait until the end of the series to find out."

Back to Life's episodes show Miri struggling to return to life outside prison. If you think about it, a lot would have changed in almost two decades. Miri's childhood room features posters of famous people who have since died and technology has moved on way beyond her favoured Tamagotchi.

“If you’re in prison you’re not removed from the world but certain things would still feel new," Haggard commented to Harper's Bazaar. "One massive change is that everyone’s on their phones all the time — literally walking down the street staring at them — that would be so weird, wouldn’t it?”

The series also deals with the post-prison treatment of women. "We expect women to be nice and behave well, to be good girls," Haggard added to the magazine. “I was fascinated by how much tougher we are on women over men, we give women a much harder time." This is vividly demonstrated by the verbal abuse Miri receives from people in her hometown as well as the vandalism her family home suffers.

Watching Back to Life is an experiment in empathy. You immediately feel for Miri, but are constantly reminded of the potentially violent crime she has committed. Ultimately, the series asks you: do people deserve a second chance? And does that chance apply to all people, no matter what their past actions may have been?

It's a tough one to answer. No doubt you'll have formed an opinion by the end of the six episodes.

You can watch every episode of Back to Life on BBC iPlayer. Alternatively, episodes are airing weekly on BBC One on Mondays at 10:35 p.m.